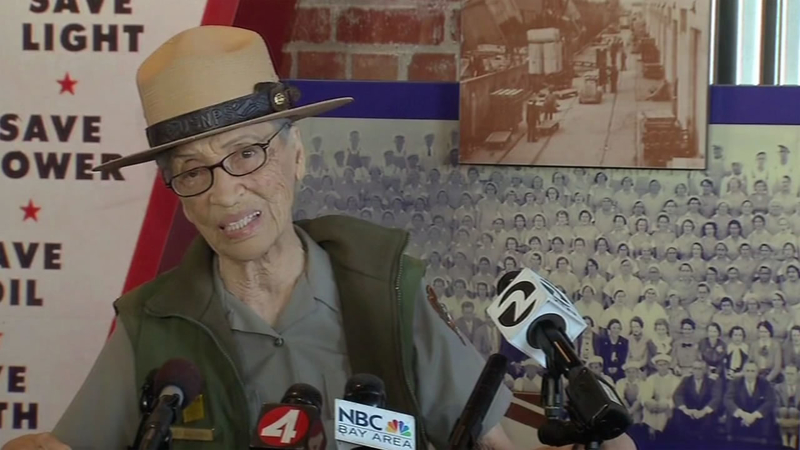 Oldest national park ranger welcomed back to work after she was attacked, robbed

RICHMOND, Calif. (KGO) -- The oldest national park ranger in the country is back at work after someone attacked and robbed her in her Richmond home.

As 94-year-old Betty Soskin returned Tuesday morning, her colleagues said they were relieved to see that she is still herself. She took a few weeks off to recover from the brutal beating she suffered during a home invasion robbery in June.

She may sound fragile, but her spirit is strong. "It's good to see all of you," she told her colleagues.

"The experience took something away from me and I'm still trying to measure that. I don't know what that is except that something is missing now, and something that can be replaced by getting back into my routine," Soskin said.

She says she still sleeps with the lights on and didn't leave her Richmond home for eight days because she didn't want anyone to see her with two black eyes.

"I was almost obsessive about not wanting to look like a victim because I didn't feel like a victim," she said.

Soskin says she still has internal bruises but she knows being back at the Rosie the Riveter Visitor Center will be a key part to her healing.

"Coming back to the people that I love dearly - my family, friends, coworkers - that those too will disappear eventually," she said.

A commemorative coin that was given to her by President Obama was stolen in the robbery. She's going to get another one but she says she now realizes it's just a coin. The experience of having the president press it into her palm -- that's what she treasures, that's what's irreplaceable.

Remember 94yo Betty Soskin? She was beaten during a home invasion robbery in June. She's now back at work! pic.twitter.com/iG6hHw5BYK

94yo Betty Soskin still sleeps with her lights on after being beaten in June during a home invasion robbery. pic.twitter.com/JaJg36LtLw