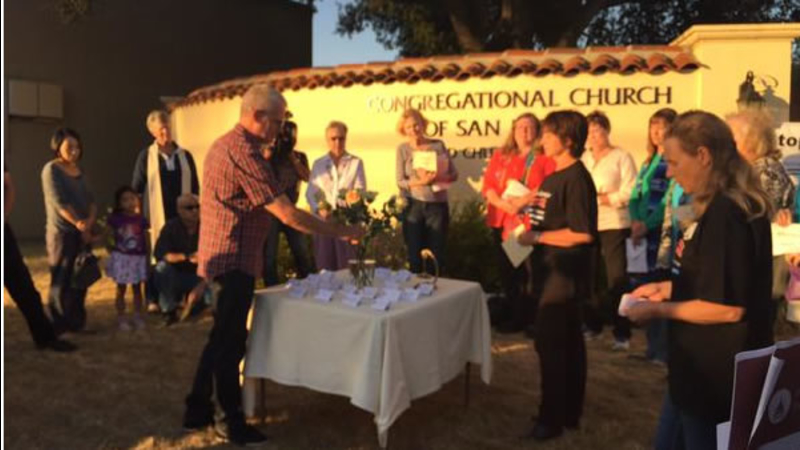 SAN MATEO, Calif. (KGO) -- There have been louder calls for stronger gun control since the deadly shooting occurred in Oregon.

The San Mateo chapter of the Brady Campaign Against Gun Violence held a vigil Sunday for the Oregon school shooting victims in support of gun control.

The Brady Campaign Against Gun Violence is definitely in support of Governor Jerry brown signing a bill that would ban concealed handguns on schools and campuses in California.

The vigil focused on the nine victims and their families.

Organizers say Thursday's mass shooting at Umpqua Community College is just the latest tragedy and a reminder of what they work to prevent every day.

Several members of the San Mateo Police Department attended the vigil and showed their support for the community.

The Brady Campaign Against Gun Violence wants to see increased background checks and more education saying perhaps that could have made a difference in Roseburg.

The families who attended the vigil hope this is the last mass shooting our nation will mourn. They hope this is the last series of vigils held in honor of lives lost at the hands of a gunman. They also hope there will be concrete changes made and that Umpqua is the tipping point. "We are in a crisis, we're not only an embarrassment in the world because of the gun deaths that we have every single day, but this mass shooting is a reflection on how we are empowering people to use these guns to solve their problems. What we want to do is keep guns out of dangerous hands," Brady Campaign Against Gun Violence spokesperson Shikha Hamilton said.

Calguns posted information about the vigil on their bulletin board, but not a single comment was made and there weren't any protesters at the vigil.

The vigil started at 6 p.m. at the Congregational Church, located at San Mateo Drive and Tilton Avenue in San Mateo.