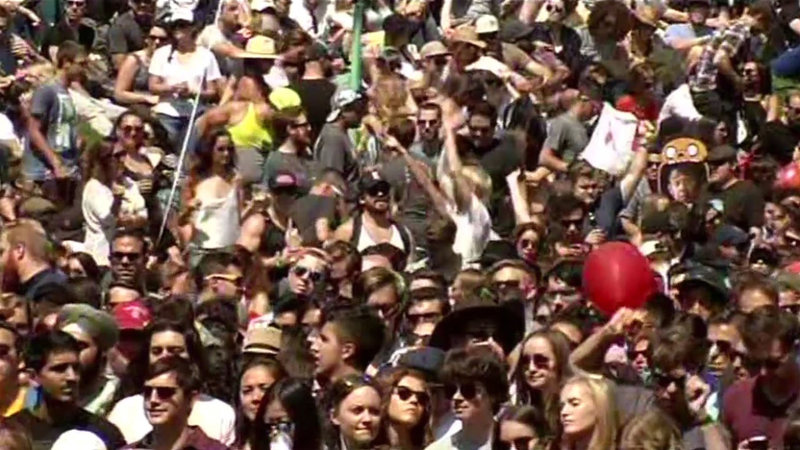 People were slowly starting to pour in Friday. Several concert-goers arrived earlier to find a parking spot. Parking has become a big money maker and other businesses are reaping the benefits too.

For the eighth year in a row, the music will bring 210,000 people to the concert. All those people, means lots of money for the local community.

Simple Pleasures Cafe in the Outer Richmond has doubled up their staff in anticipation of the surge in customers that has turned what's normally the slowest time of the year to the busiest.

"It gets crazy in Outer Richmond," said Sarah Franks, a barista at Simple Pleasures Cafe. "I couldn't tell you figure wise. It's really crowded, constant flow of people, lines out the door. Going to be crazy this weekend."

Outside Lands is said to generate $70 million dollars every year to the San Francisco economy.

It also happens to be the biggest fundraiser for schools who recognize parking is scarce so they open up their lot for a flat fee.

"This is great way for us to raise money for our school PTA," said Frank Bobadilla a Lafayette Elementary School parent. "There are lots of ways PTA spends money, on books, on art supplies, music supplies, supplemental things the budget can't afford."

Lafayette Elementary School expects to sell out every single spot over the weekend. It has made as much as $16,000 in the past. This year is expected to be no different.

"We are super lucky and super grateful we have this area here we could do that," Bobadilla added.

Tickets sold out in one hour for the three-day music festival at Golden Gate Park. Vendors are lined up to feed the masses and the stage is set for the first performance Friday.

"I like look forward to this all year," said Alex Franklin of Portola Valley.

Concert CEO Greg Perloff says that in the festival's history, he has never seen a crowd so big, so early.

"It's amazing. People will tell you who they want to see. This is an enormous crowd, said Gregg Perloff of Another Planet Entertainment.

Some big headliners this year are Elton John and Mumford and Sons. Since Outside Lands first started in 2008, it has given the city's Recreation and Park Department $10 million.