KGO
By by Leslie Brinkley
OAKLAND, Calif. (KGO) -- There was a close call in the Oakland Hills overnight as a fire grew into a 40-foot wall of flame and started heading uphill. Residents escaped as firefighters extinguished the blaze.

Flames broke out around 11 p.m. Monday night on a steep construction site where two homes were nearing completion along Snake Road.

Neighbor Greg Holt grabbed his wife and one-year-old daughter. He said there was, "a 40-foot wall of flame and it was raining embers. Apparently one of the embers caught my neighbor's car on fire on the way down. We had to get out quickly."

Firefighters described the air as filled with flying embers as they first arrived. They evacuated 50 homes as the flames advanced up a dry hillside fueled by 18 mile-an-hour winds and extremely low humidity.

Battalion Chief Dino Torres said they saved many homes in what had the potential to turn into the kind of fires now being battled in Southern California.

Neighbor Maya Castro said, "I had a horrible feeling in my gut because I knew about the 1991 fire and I was terrified it would happen all over again."

The Holts came back to look at their home Tuesday, blackened by the blaze, trash cans melted.

They credited their escape on being "appropriately paranoid" saying they got out of their house in 90 seconds because they already had a go bag packed after seeing all the wildfires this fall.

Five homes were badly damaged. Structural engineers are evaluating Snake Road now to determine if it's safe to drive on after the fire. 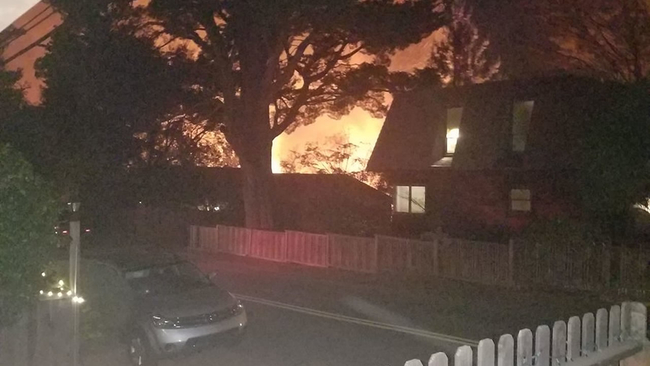