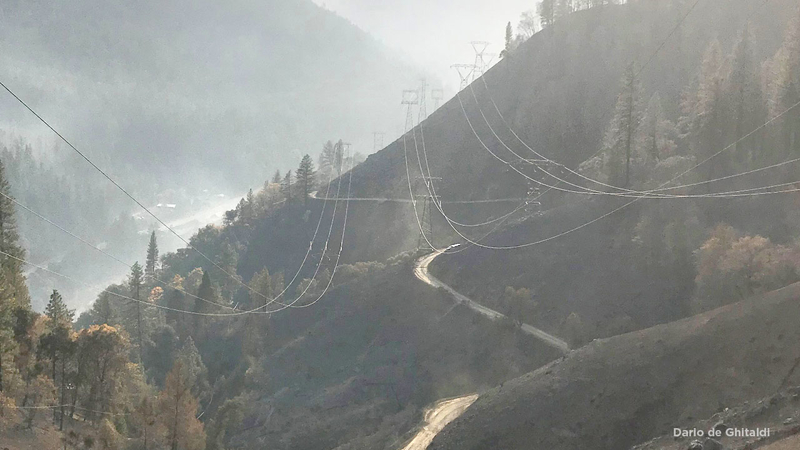 SAN FRANCISCO (KGO) -- PG&E now admits a power line failure was the probable cause of last year's devastating Camp Fire that killed 86 people and destroyed thousands of homes. In a filing with federal regulators Thursday, PG&E also expresses doubt about its ability to remain in business.

This news comes with the release of PG&E's 2018 financial results-- wildfire damage drove it into the red, posting a loss on the year of $6.9 billion.

RELATED: PG&E planned in 2013 to fix power line that may have started Camp Fire

"That caused sparks", de Ghitaldi tells the I-Team. "The sparks fell down into the brush and the fire started."

In its filings with the Securities and Exchange Commission Thursday, PG&E laid out why that tower appears to be Camp Fire's ignition point:

Fifteen minutes later, a PG&E employee observed fire in the vicinity of Tower :27/222, and later that day, an aerial patrol spotted an insulator that had separated from an arm on the tower.

November 14th, the company observed a broken C-hook that held the insulator, wear at the connection point, a flash mark on Tower :27/222 and other damage.

Now, PG&E reports it "has completed more than two-thirds of enhanced inspections of its 5,500 miles of transmission lines and approximately 50-thousand transmission structures including towers and poles in high-fire threat areas" and should finish by the end of March. Much of the work is being done by drones as seen in this video PG&E gave the I-Team late Thursday.

But, State Senator Jerry Hill said today in Sacramento that PG&E should have made safety improvements on the Caribou-Palermo line years ago.

"PG&E had improvements they were going to make on that line and they deferred them," said State Senator Jerry Hill of San Mateo. "They got the money for it, spent the money on something else, and asked for the money again and every year they were supposed to do it, they still haven't started the work that was to be done on that line."

PG&E confirmed today its 2017 and 2018 wildfire losses could exceed $30 billion, and concluded, "Management has concluded that these circumstances raise substantial doubt about PG&E Corporation's and the Utility's ability to continue as going concerns."

Former State Senator Noreen Evans is now a lawyer representing wildfire victims. She told the I-Team today, "The fact is that PG&E has caused this type of devastation for two years in a row." Evans shared PG&E's dim outlook for the utility, saying, "PG&E as it currently stands has a long history of explosions, poisoning water and burning down communities, and as it currently is structured, PG&E may just be too big to effectively regulate and so breaking it up is probably in the public's best interest."

Cal Fire would not give the I-Team a time frame when their investigation will be complete. The spokesman saying, it's a very time consuming process and every fire is different.