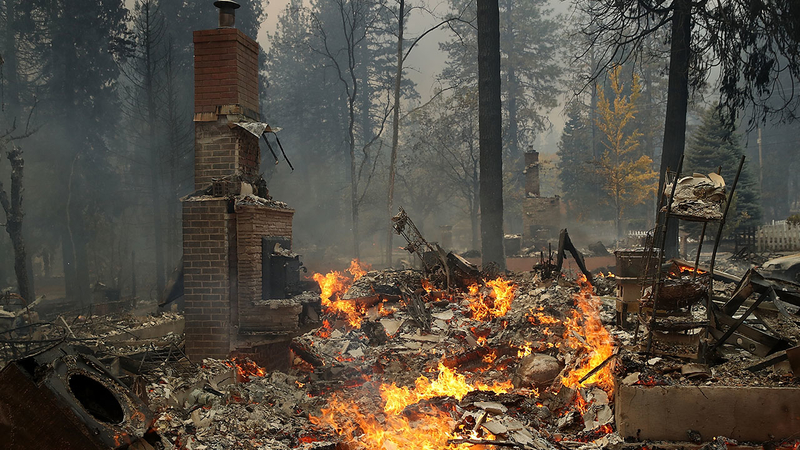 SAN FRANCISCO (KGO) -- A stunning headline coming out of PG&E's filings with state and federal regulators. The utility delayed safety work on a transmission line for years, and that line is now the prime suspect in starting November's deadly Camp Fire.

Consumer advocates and lawyers for wildfire victims say PG&E was more interested in their bottom line than making safety improvements.

In a July 2013 letter, PG&E tells the Public Utilities Commission that it intends "to replace six consecutive lattice-steel towers with new towers on the Caribou-Palermo 115 Kilovolt (kV) Power Line" that were damaged by a winter storm.

The Wall Street Journal reports today that those improvements were delayed year after year, and never done.

That is the same transmission line now being investigated as the cause of November's Camp Fire in Butte County that killed 86 people and destroyed 14,000 homes.

On November 8th of last year, a PG&E worker reported seeing a fire starting under the Caribou-Palermo line near Paradise. Cal Fire told me today the cause of the Camp Fire is still under investigation, but "if a violation of state law is determined, the investigation report will go directly to the local DA."

Wildfire victims' attorneys say it's a pattern -- that PG&E raises money for such repairs and then delays the maintenance, to make their bottom line look better.

The Public Utilities Commission told the I-Team today they are looking at the "root cause of the incident, including historic maintenance and expenditures" and that PG&E "is subject to fines of up to $100,000 per violation per day" if it's found to have violated state law.

Mark Toney said, "They were more concerned about financial performance then they were about safety and fixing things that they admitted themselves needed to be fixed."

As part of their wildfire mitigation plan filed three weeks ago, PG&E says they've launched a wildfire safety inspection plan for transmission towers in high fire threat districts, looking for what they call "failure mechanisms" using ground inspections, drones and helicopters. They expect those inspections to be done by May.

Also today, the bankruptcy hearings chugged along. PG&E confirmed in court that they will not be paying $130 million of bonuses to 14,000 employees after all. The public outrage was too much.

READ PG&E'S FULL STATMENT BELOW:
"The safety of our customers and the communities we serve is our most important responsibility. We disagree with the overall premise of the Wall Street Journal article. It inaccurately portrays planned electric transmission regulatory compliance work, and omits key aspects of the work we are currently doing to enhance safety. It is important for our customers to know that we are taking action now on important safety and maintenance measures identified through our accelerated and enhanced safety inspections and will continue to keep our regulators, customers and investors informed of our efforts."

Additional information about the inaccuracies we (PG&E) identified in the Wall Street Journal story is here:

Working Together to Combat Extreme Weather and Wildfires