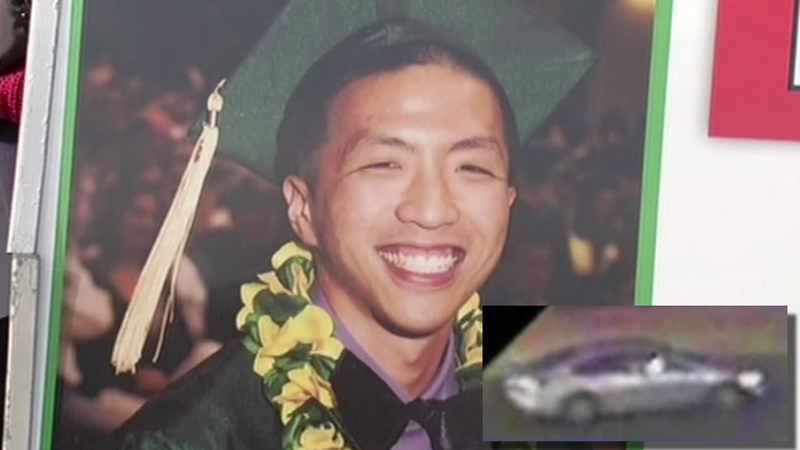 OAKLAND, Calif. (KGO) -- There are new details this evening in the case of a man who was murdered in Oakland after a minor fender bender.

Aya Nakano pulled over when his car was rear ended. That's when police say two men got out and confronted him. One of those men fired the shot that killed him. Now, police and the man's mother believe someone out there knows who did it.

Nakano's car was hit, and he did what any of us would do, he pulled over. That's when police say two men got out and confronted him. One of those men fired the shot that killed him. Someone knows the man who did it. The police department has spent almost $50,000 in funds that they have raised to put up posters to ask the public for help.

"I don't know why it has been relatively silent, alarmingly silent if you ask me," said Maria Climaco, Nakano's mother.

Silent and making a case with so few clues, even harder to crack. Despite a $100,000 reward for information leading to the arrest of those responsible for killing 22-year-old Nakano, new leads have been slow to develop.

"The response that we were expecting isn't there," said Climaco.

On Tuesday, ABC7 News spoke to Climaco at the very spot police say at least two men got out of their car and gunned down her son. She continues to struggle with the loss.

Climaco said, "It has gotten worse. That feeling of desolation is more profound than ever."

Her frustration is aimed at an understaffed police force that is lacking the resources to assign more manpower to Aya's case.

In January, seven months after her son was killed, Oakland police released a photo of the car they say was driven by the suspects. The picture is grainy and difficult to make out, but investigators hoped it would be enough to generate new information. Unfortunately, it hasn't.

"Somebody knows something in our community," Oakland Police spokesperson Ofc. Johnna Watson said.

Oakland police insist, even a year later, Nakano's murder is still a priority, saying investigators can't always share everything they know , reinforcing the point that tips from the public are key to making a cold case hot.

"That piece of information, whether it's small or large can be the significant piece that would start putting these dots together, linking for us to solve this homicide," Watson said.

Aya was one hour away from his 23rd birthday when he was shot and killed. This weekend, many of his friends and family will meet to honor him and continue their efforts to raise money for posters and a reward that has grown to $100,000. In the meantime, this mother will continue to remind Oakland of the son she refuses to let them forget.

"I'm hoping that someone out there, someone from this neighborhood, will remember something," said Climaco.