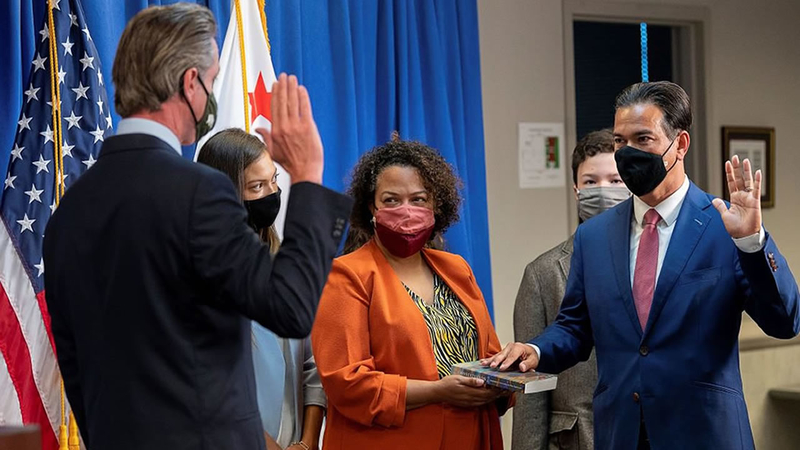 SAN JOSE, Calif. (KGO) -- Many admit, the recent confirmation of California's new Attorney General Rob Bonta proves there is a place for Asian American Pacific Islander (AAPI) representation across all levels of government.

With today's call to action and among the demands to Stop AAPI hate, ABC7 News found there is an amplified interest within the community to seek greater political influence.

"My name is Alex Lee. I'm the state assemblymember for District 25," he announced proudly, during a one-on-one interview.

History was made Tuesday in Santa Clara County where South Bay voters elected the youngest state legislator in eight decades.

He's touted as the first Generation Z legislator, the first to be openly bisexual, the youngest Asian American lawmaker, and at only 25-years-old he's the youngest to be elected in more than 80 years.

"It's important to me to be doing the job really well, really competently and to make sure that we can prove that more people deserve to be at the table like that," he told ABC7 News.

"You can't imagine yourself in that role if there's not someone that looks like you, speaks like you, thinks like you," he elaborated. "And having that kind of mentorship and knowing that was possible, at least gave me the inkling of the idea to do so."

U.S. Census Bureau data details the AAPI community accounts for more than 15% of California's population. That number drops to roughly 80% when looking at representation in the State Legislature.

Nationwide, according to the Congressional Research Service, out of the 535 members of Congress, just 17 are of AAPI descent.

Assemblyman Lee stresses that lived experiences have the power to shape policy.

"I might succeed, I might not," AG Bonta told ABC7 News in a one-on-one interview. "That's for others to judge. But I'm never going to be outworked."

He continued, "Right now, I'm working hard every day, exclusively focused on how to uplift the lives of Californians and make their lives better."

As the state's new "top cop," he believes the AAPI community is better protected and better represented with him there.

"The AAPI community in California is the fastest growing. We are powerful, we are talented, we are committed to change for the better," AG Bonta shared. "And creating a community and a state that we can all be proud of- I'm excited to do my small part in that regard. And I'm just really thankful for our incredible AAPI community throughout the state."

It's privilege that isn't lost on either AG Bonta or Assm. Lee.

"I think about every day when I go to work in the State Capitol," Lee reflected. "How that was the birthplace of a lot of really terrible, problematic and racist laws, right?"

Lee referenced the Chinese Exclusion Act and the internment of Japanese Americans. He said he recognizes today, there are clear signs of change.

"I sit at a desk, where probably generations of legislators would be completely repulsed that a queer young Asian person is now sitting at their desk and making decisions," Lee added. "Because that's how far we've come this country. And we can go even further in making sure that our society is completely inclusive of every single person there is."

Bay Area people of the AAPI community are speaking out against the harmful "Model Minority" stereotype.

Lee is not alone.

Taking a closer look at the Bay Area and on the city-level, Reflective Democracy Campaign found Fremont, San Francisco and San Jose make the list of the five large American cities with the highest concentrations of AAPI residents.

Data from the campaign showed Fremont and San Francisco have roughly proportional AAPI elected leadership at the city-level.

However, it found San Jose- with the fourth highest share of AAPI residents- has hardly any representation.

Regardless, it's clear the push is on, as many seek reflective leadership.