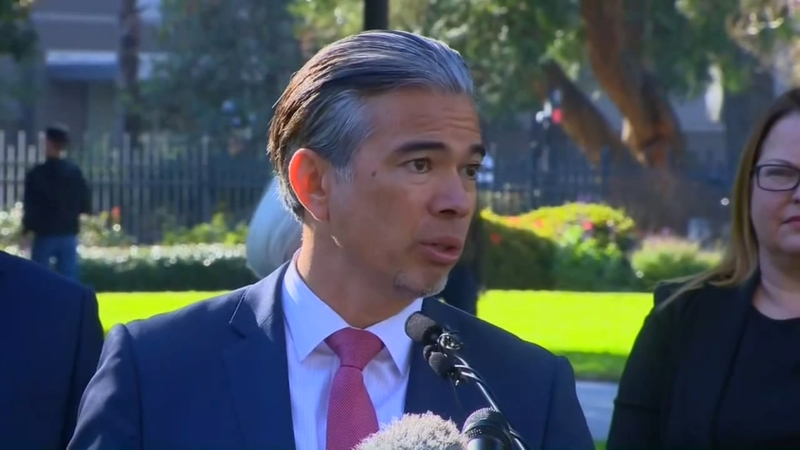 SAN FRANCISCO (KGO) -- Governor Gavin Newson nominated California State Assemblyman, Rob Bonta, as the next State Attorney General, the position left by Xavier Becerra. Bonta was the first Filipino-American to serve in the state legislature and is an ardent supporter of civil rights and racial equality.

On Wednesday, Robert Bonta hugged his family after Governor Newsom presented him as his nominee for State Attorney General.

"And now my mother Cynthia and my father, who can't make it today, will see a governor nominate their son to be the first Filipino-American as Attorney General of California," said Bonta.

"He is a decent human being, person of character, person of honor and a person who is a fierce advocate of justice," said Newsom about Bonta.

ABC7 reporter, Kate Larsen, spoke to State Assemblyman David Chiu, who is good friends with Bonta. "I did just get off the phone with him a little while ago and as you can imagine, he is thrilled, elated, and incredibly humbled and awe struck at this moment," he said.

Chiu said at one point that his own name was being floated for attorney general, but he has always supported Bonta for the job.

"I think any of us who are attorneys, being the attorney general of the State of California is the epitome of public service. But for our friend Rob, he's someone who has been in the fight for justice his entire life. He's the son of farm worker organizers who worked with Cesar Chavez."

Bonta was born in the Philippines and moved to California when he was two months old. A graduate of the Yale Law School, Bonta later worked with the ACLU to adopt new rules to prevent racial profiling by the California Highway Patrol.

In 2012 he won the election to the California Assembly, representing Oakland, Alameda and San Leandro.

"He has a certain tenaciousness that I saw when he was a young kid," said Emil de Guzman, who has known Bonta and his family for decades.

In the 1970s, protesters fought to keep the city from evicting Filipinos living at San Francisco's International Hotel - Manilatown Center. de Guzman and Bonta's mother protested there together. In a full circle moment, Tuesday's nomination event took place at the International Hotel.

I am honored & humbled that @GavinNewsom has chosen me to serve as your next Attorney General. Join our fight. https://t.co/nX8U3Xray4 pic.twitter.com/ANeOOxGIAj

"His appointment will really inspire, will really give many people a feeling of empowerment of the fact that as Filipinos, our time has arrived," said de Guzman.

"Especially now with all of the Asian hate crimes, having a strong API attorney general is very, very important," said Ma, who says she has known Bonta for 15 years. "Having a top cop who is going to prosecute these type of Asian related crimes is very important to our community."

"I will do everything in my power to make sure everyone continues to belong and that I fight for them," said Bonta on Tuesday.

Bonta is expected to be confirmed by the Democrat-led state legislature.