KGO
By Laura Anthony
OAKLAND, Calif. (KGO) -- Former Oakland Police Chief Anne Kirkpatrick is breaking her silence less than a week after she was abruptly fired by the Oakland Police Commission and she's leveling some serious allegations at the commission and her former boss Oakland Mayor Libby Schaaf.

The most serious, highlighted in a confidential report recently made public, was that Kirkpatrick may have been terminated partially in retaliation for not performing special favors to commission members.

The report, created by a private investigator, cites an incident in September of 2018 when Commissioner Ginale Harris allegedly demanded she be reimbursed for towing fees for her private vehicle. Kirkpatrick says refused to provide that special treatment. 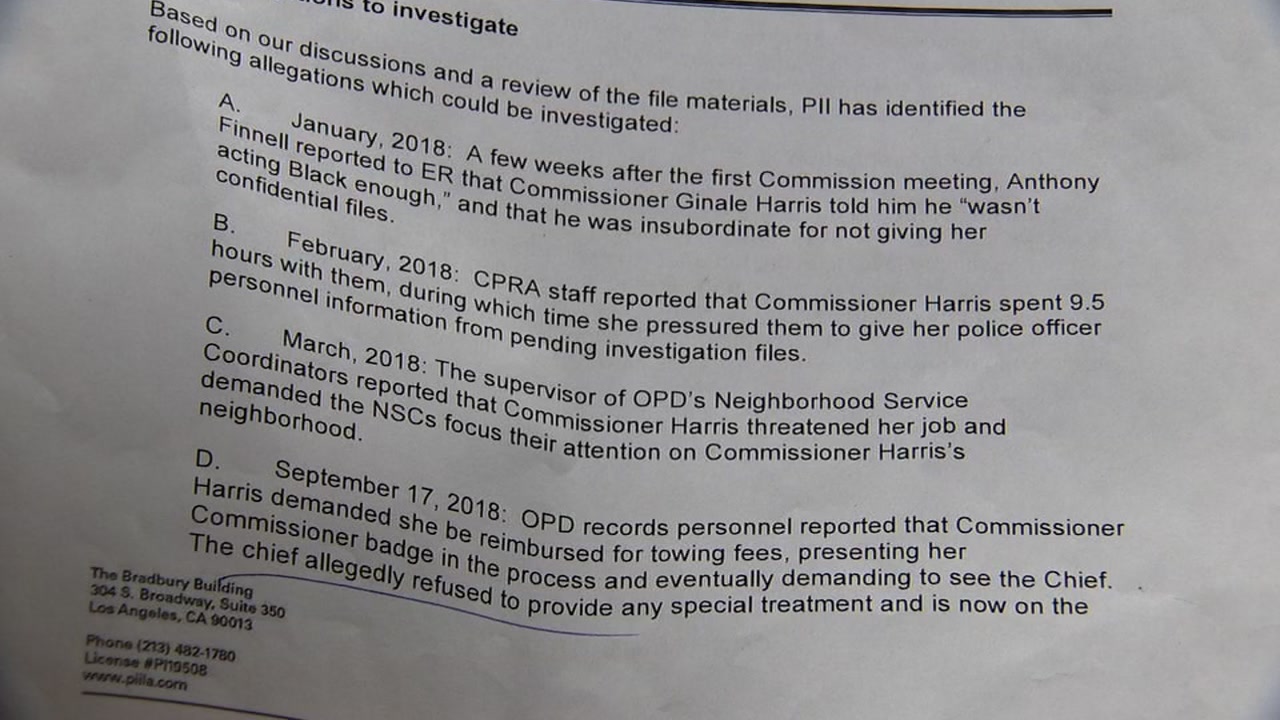 A internal memo about the Oakland Police Commission is pictured in this photo from February 24, 2020.

In an interview with ABC7 News, Kirkpatrick said she would soon be sharing 'significant information' related to this issue. She said is in support of civilian oversight of police departments, but had major concerns about the behavior of this commission's members.

ABC7 News reached Commissioner Regina Jackson on Monday, who stated she speaks for the commission: "That assertion is completely unfounded and untrue." She additionally denied that Commissioner Harris ever asked Kirkpatrick to reimbursed towing fees.

"I don't think I was who they wanted to begin with," said Kirkpatrick. "I'm not an Oaklander."

Kirkpatrick said she found out she could be fired a few days before the decision was made, but was surprised nonetheless.

"I'm not angry. I will tell you that I'm disappointed," said Kirkpatrick. "I'm embarrassed. It's humiliating to receive calls from all over the country... well-wishers, but to see headlines that you've been fired."

She believed she never had the full support of the police commission but she did think she had the backing of Mayor Schaaf -- until the mayor sided with the commission.

"I believed her," said Kirkpatrick. "When she says I'm fabulous and I'm worth the fight and I'm this and I'm that...and I had accomplished all the mandates that had been given to me... I believed her. And I don't believe anymore. And that's always disappointing when you believe in someone."

Just three years ago, Mayor Schaaf hired Kirkpatrick. She was the first female police chief in the city's history.

"The mayor remains grateful to Anne Kirkpatrick for her service to Oakland. Under her leadership, Oakland saw one of its lowest periods of gun violence and officer-involved shootings, as well as new anti-racial profiling policies that significantly reduced discretionary stops of African Americans. The Police Commission exercised its full power and voted unanimously to remove her from her position. It is the Mayor's duty to determine when the trust between the Police Commission and the Police Chief has become irrevocably lost and prevents Oakland from moving forward."

"I do not regret choosing Chief Kirkpatrick, and I believe there are many examples of ways that she served our city extremely well over these three years," Schaaf told ABC7 News after the decision.

Oakland Police Commission Chair Regina Jackson claimed the chief's firing was without cause and while there have been notable successes under Kirkpatrick's leadership, the commission felt she was still lacking.

"There are a lot of improvements, but the disparities continue to exist. And there are a series of other issues that have just contributed to losing the confidence, we didn't think that she was going to be the most effective chief in Oakland," said Jackson. "We want a new chief to build community trust, to address the disparities that still exist, to diversify and grow the department to the level of respect to the level our officers and our community deserve."

Kirkpatrick had openly sparred with commissioners in past meetings and the commission also criticized the 60-year-old Kirkpatrick for failing to fire four officers involved in a controversial 2018 shooting that left Joshua Pawlik dead.

Unlike those who fired her, Kirkpatrick believes she has made significant progress toward complying with the federal monitor's stated goal in reforming the Oakland Department, including violence reduction and hiring more women and minority officers.

"I want to be clear that I am not opposed to federal oversight, but after 17 years in this pattern of firing chiefs, 10 of them, this pattern that we can't seem to come to compliance is troubling," said Kirkpatrick.

She told us that she will ask the U.S. Department of Justice to investigate and she is considering legal action against the city.

One thing Kirkpatrick knows for sure is what she would say to the next candidate for Oakland Police Chief.

"I would tell any person who calls me...and they will. Any candidate will be calling me that if you have a family or children or parents, anyone who is relying on their income...do not come to Oakland because they will not have a job for long."

Kirkpatrick is entitled to one-year salary as severance, that's around $273,000.

"Since the Commission's inception, the Commissioners, along with the rest of the citizens of the City of Oakland, observed the Oakland Police Department's failure to increase compliance with the court-ordered reforms required under the Negotiated Settlement Agreement (NSA). The Commission's vote reflects our desire to see the City of Oakland move ahead under new leadership. The Commission looks forward to working with Mayor Schaaf to identify a Chief of Police who will build trust in the community and address racial and gender disparities that continue to exist in the Department and in our City. Our new Chief must address use of force issues and end the need for a court-appointed monitor. The Commission demands a leader who will diversify and grow the Department to the level of respect that our officers and community deserve. The Department must be a model of constitutional policing and justice, and the Commission is committed to working with the Mayor to find the right next leader."

The Oakland Police Officers' Association stands ready to work with whomever is our next Chief of Police. Despite the changes at the top of the department, Oakland Police Officers continue to come to work every day and serve our residents in California's most crime challenged city.
Report a correction or typo
Related topics:
politicsoaklandpolice chiefoaklandpolicelibby schaaf
Copyright © 2021 KGO-TV. All Rights Reserved.
RELATED
Oakland City Councilmember reacts to police chief firing
Oakland Police Chief Anne Kirkpatrick fired
Anne Kirkpatrick sworn in as Oakland's new police chief
More Videos
From CNN Newsource affiliates
TOP STORIES