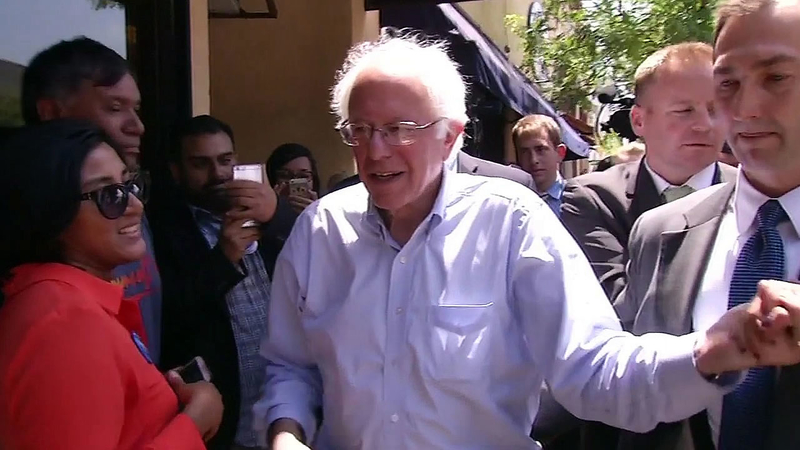 Sanders was in Stockton and the Bay Area Monday, where he said he's the only one who could beat republican Donald Trump.

On Monday, Sanders made a surprise visit to his campaign office in Oakland.

He showed his easy going personality off walking down College Avenue as he greeted supporters and it was a visit few expected, but that many had hoped for.

Sanders said he expects to win the West Virginia primary and hopes to do the same in California, even if Hillary Clinton is dominating the delegates count, Sanders told reporters that he's the only one that can beat Republican contender Trump. "First day we were in this campaign, nobody thought that we would be fighting here, and stand a good chance to win in California on June 7, so an uphill fight is not something that gets me nervous, that's what I've been doing from day one.

Word about Sanders arriving at the Oakland office started out as a possibility and quickly spread on social media.

On Sunday night, Sanders was in Sacramento addressing about 16,000 people and Monday morning he attended a rally in Stockton.

On Monday afternoon, Sanders stopped at a San Francisco coffee shop for sitting down with the editorial board of the San Francisco Chronicle.

Officials said he will be in Oregon Monday night.

For full coverage on the 2016 presidential election, click here.

Here's a "big" supporter of @BernieSanders showing up at his headquarters in Oakland. pic.twitter.com/jeJj5qp3y8