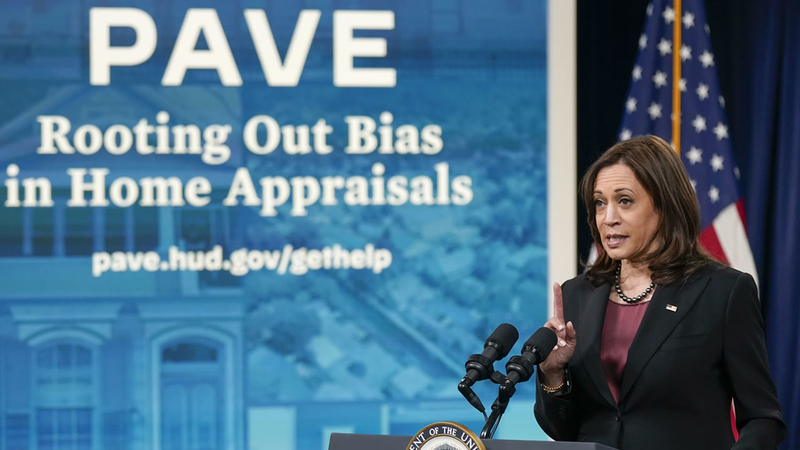 The plan is part of a broader federal effort to address a wealth gap that systemic inequality has perpetuated.

Vice President Harris announced the PAVE action plan at the White House Wednesday. She offered remarks on the plan as the White House hosted affected families to share their stories of appraisal discrimination.

"We've heard the stories of people who have tried everything to avoid an unfair appraisal, stories like that of Tenisha and her family," Vice President Harris said in her opening remarks.

The Austin family from Marin City were among the families invited to the White House.

Many will recall the Austin family's story of their home being undervalued by nearly $500,000.

The Black family's home value went up when they took down family photos and artwork, before having a white friend stand in for them in a subsequent appraisal.

"I'm telling my family's story because I know appraisal bias is holding African Americans back from growing and supporting their families in a way that we want to and deserve to," said Tenisha Tate-Austin as she welcomed VP Harris to the stage.

Among the 21 steps in the plan is a legislative proposal to modernize the governance structure of the appraisal industry. Appraisers help to determine the value of a home so buyers can receive a mortgage.

The plan also calls for the task force to issue guidance and implement new policies to improve the reconsideration of value processes if the initial valuation of a home by an appraiser is lower than expected. HUD will require FHA lenders to track usage and outcomes of ROVs.

The task force will also work to change the standard appraisal form so there is less of a chance to include overt or indirect references to race, ethnicity or other protected classes and strengthen language on the form to ensure the appraiser is certifying that their opinion is not based on discrimination.

An analysis by mortgage buyer Freddie Mac shows appraisers are more likely to undervalue homes in Black and Hispanic neighborhoods. This form of discrimination widens the racial wealth gap.

The task force will direct supervisory and enforcement agencies to better coordinate to identify appraisal discrimination.

As noted in reports by the National Fair Housing Alliance, the appraisal workforce is overwhelmingly white and male.

The PAVE action plan called for the government to work to diversify the appraiser workforce which, according to the Department of Labor and Bureau of Labor Statics, is 97.7% white and 70% male.

One solution is to work with HBCUs, tribal colleges, and minority-serving Institutions to develop the next generation of appraisers.

"Your home is valued for $25,000 less than two doors down from you, correct? How does that happen to the HUD secretary?" asked Glover.

"Because I live in a Black neighborhood. So my neighborhood is one that is automatically considered to be not as good as a neighborhood that starts two doors from me. There is a bias and inherent bias that the appraisals have had for generations, this just didn't start," said Fudge.

According to the study, Black renters in San Francisco faced the sixth worst response rate in the country.

Secretary Fudge admits there is work still to be done.

As the Austins continue to fight with lawsuits against the appraiser and appraisal management company involved in their lowball appraisal, they're proud of the change created by their story - and the stories of so many others we've covered here on ABC7 News.

"It's unfortunate that we're here, we are happy that we are here with this change moving forward," said Tate-Austin.

"I'm super proud of you and all the work that you put into this story because without you it wouldn't have blown up the way that it did," said Paul Austin.

The task force of 13 federal agencies and offices will continue working over the next year to turn some of the proposals included into today's report into action.