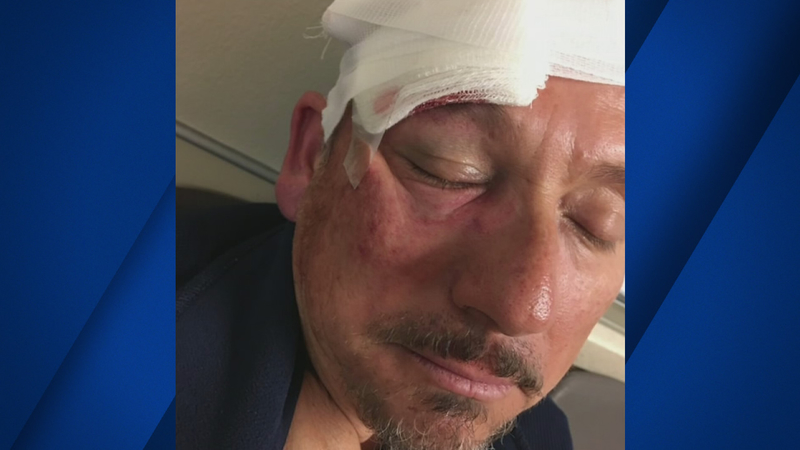 LOS ANGELES -- Thirteen-year-old Yasmine Romero is traumatized by the violence that left her father bloodied and bruised after the Rams playoff game.

"I felt three big men hitting me. Hit me in the head back of the neck and in my face," said Henry Romero.

The brutal beating left Romero with a fractured eye socket, stitches in his forehead and deep disappointment with his treasured team.

The trouble erupted when father and daughter walked down to see the players and take some pictures. They say security asked them to move because they were escorting people out who were sitting in the Rams family section.

"The lady behind him, I don't know who it was. We have an idea of who, but (she) kind of started arguing with me. 'You need to move. We're the player's family.'"

Words were exchanged before Romero and his daughter started to walk back to their seats, then they say the fists started to fly.

"For her to lunge at me, I was completely caught off guard and that's when she was pushed down. I just went to kind of protect myself," Romero said.

The 13-year-old was also hit in the melee as the three men started punching Romero.

The family of five -- all die-hard fans and season ticket holders -- say the suspects were quickly escorted out by security, leaving Romero bleeding in the stands.
The family has filed a police report and the LAPD is now investigating.

In a statement, the Rams said. "We are aware of an incident following our game and we are working with authorities to determine exactly what happened."

The family says they want the suspects held accountable.

"I want justice for my husband and our family," Karina Romero, Henry's wife, said.

Romero said he's frustrated that the suspects weren't held at the game and that police weren't called.