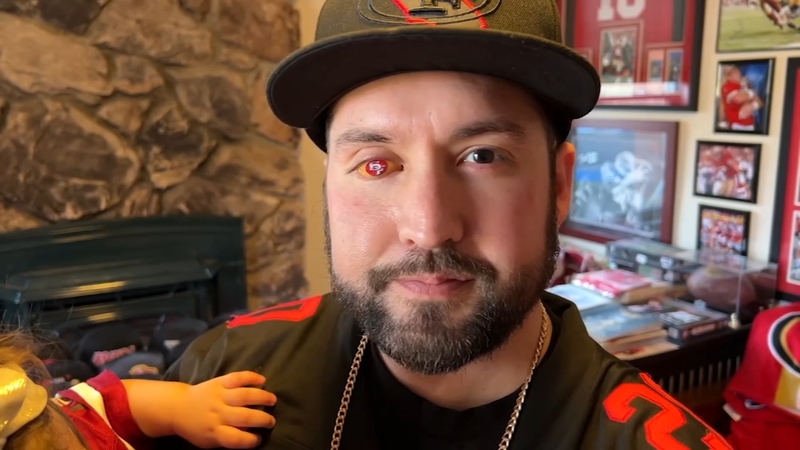 FREMONT, Calif. (KGO) -- Tickets are continuing to sell for record prices for the NFC Championship game between the Los Angeles Rams and San Francisco 49ers this Sunday.

But, you don't have to get a ticket to enjoy the game in a stadium-like atmosphere.

Some of the biggest Niners watch parties are happening in the South Bay. One of them is hosted by a 49ers superfan.

When it comes to the Faithful, there are die-hards and then there's Fremont resident Rey Peña.

Jerseys, hats, chains, he has been collecting 49ers memorabilia for decades. But his prized possession is something no one else has.

After an accident and cancer diagnosis, Peña lost his right eye and had it replaced with a 49ers prosthetic. He is now aptly known as "the eye of the 49er."

"That's how die-hard faithful I am," Peña said.

There may be no “I” in team, but this fan has his team in his “eye”. An accident and cancer left Rey Peña without his right eye. So, to further prove he is a Faithful #49ers fan, he had this custom eye created. He’s known as “Eye of the 49er”. That’s dedication! #FTTB pic.twitter.com/k5fGYEsk0G

With his Niners in the NFC title game, he has his eye on something that can be a new addition to the collection: some championship gear.

"I anticipate a win, that's what we want to do," Peña said. "We want to go to the Super Bowl and hopefully I'll book my trip to LA after Sunday."

But for this weekend, Peña will be in the Bay Area to watch the game.

With record ticket prices, Peña and other local 49ers fan clubs are hosting a watch party at Metro City Restaurant and Bar in Sunnyvale.

"When people go to these events, you meet people from all over the world," Peña said. "It doesn't matter if you're from here or from the East Coast, from another country, it's all about our team and cheering our team on."

There will be watch parties across the Bay Area this weekend, including at SP2 Communal Bar and Restaurant in Downtown San Jose.

"It gets really packed," SP2 Owner Tin Le said. "We have lines out the door right before we even open. The energy here is great. We play the game audio, there's a DJ, kids are out, so it's great energy for us."

Great energy and great for business.

After COVID-19 changed watch parties last season, the 49ers deep run is just as important for fans as local businesses.

"It's a godsend for the restaurants," Le said. "We've been struggling for the last two years and to have this energy back so quickly and unexpectedly, it's great."

SP2 has a COVID-19 vaccine requirement to attend their 49ers' watch party.

So, if you don't have tickets for Sunday, find a place to enjoy the game with the Faithful.