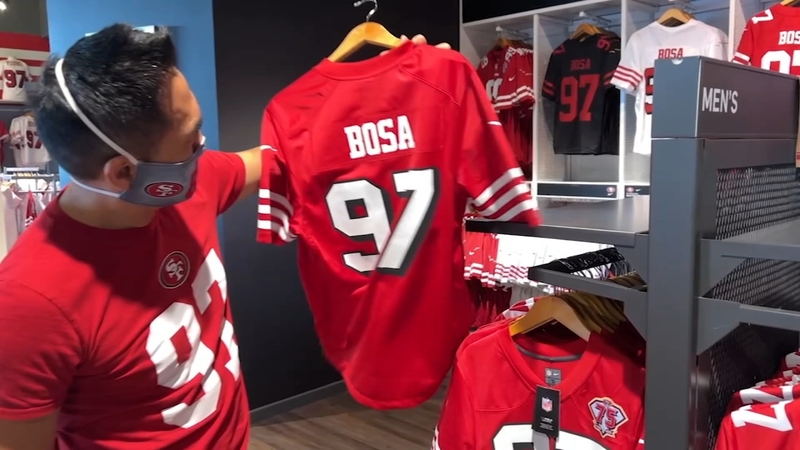 SANTA CLARA, Calif. (KGO) -- When the San Francisco 49ers earned their playoff spot by beating the Rams in Los Angeles a few weeks ago, there was a sea of red and gold in the stands.

The Faithful hope and anticipate that will be the case again this weekend despite the high cost of tickets.

49ers fans are "Faithful" to the Bay and call Levi's Stadium home.

But this weekend, fans hope they'll be the Faithful in L.A. when the 49ers travel to take on the Los Angeles Rams in the NFC Championship game.

"It's the red and gold nation coming in there and turning that stadium red," 49ers fan Doug Caskey said. "That's what they're fearing. You can hear it from Stafford's wife saying she was in fear of the stadium turning red. Niners fans are coming out in full force."

The fans were certainly in full force Monday morning when the 49ers team store opened up - Fans grabbing all the red gear they can to be ready for the huge playoff game in Southern California.

"I got too much," 49ers fan Jordan Alcocer said. "I got some nice posters, some chains. I got a whole lot. My day off and I lucked out and I had to come down here and get some stuff."

Fans of the San Francisco 49ers are starting to believe this team could return to the Super Bowl.

Items were flying off the shelves about as fast as tickets are selling for this California rivalry renewed.

But it wasn't hard to find a few fans at the store who have also already locked in their spot at SoFi Stadium on Sunday.

"Ah man, I can't contain myself," Caskey said. "I can't wait. I'm counting down the days. That's why I'm here at the Niners store to get my new jersey. I got my new Montana '89 jersey."

But with COVID cutting fan attendance last year, it was an easy decision for season ticket holder Doug Caskey to book his trip.

It wasn't easy to get here for the 49ers, but the Faithful are keeping their faith that a Super Bowl trip is possible after this weekend.

As the 49ers gear up for their big playoff game in Green Bay, a pair of French bulldogs from the Bay Area are playing a role in the team's success!

"I think they're going to keep it up and win this weekend," 49ers fan Matthew Curayag said.

Is this Faithful passion the reason tickets were not available to Bay Area fans earlier Monday?

A notice on Ticketmaster that restricted NFC Championship tickets to those with ZIP codes in the LA area has disappeared from the ticketing site.

We don't know for sure, but what we do know is at one point, there was a notice on Ticketmaster that restricted NFC Championship tickets to those with ZIP codes in Southern California.

It was later removed from the ticketing site's website, but fans who had previously been attempting to buy tickets received a notice saying, "Public sales to the game at SoFi Stadium in Inglewood, CA will be restricted to residents of the Greater Los Angeles region," and, "Residency will be based on credit card billing address at checkout."

It appears the Rams are already afraid that the 49ers will again make SoFi Stadium their home — they're trying to restrict ticket sales for a potential NFC title game by geography.

IMO pathetic and also premature — LA isn't even in the title game yet pic.twitter.com/G8VmbG9muv