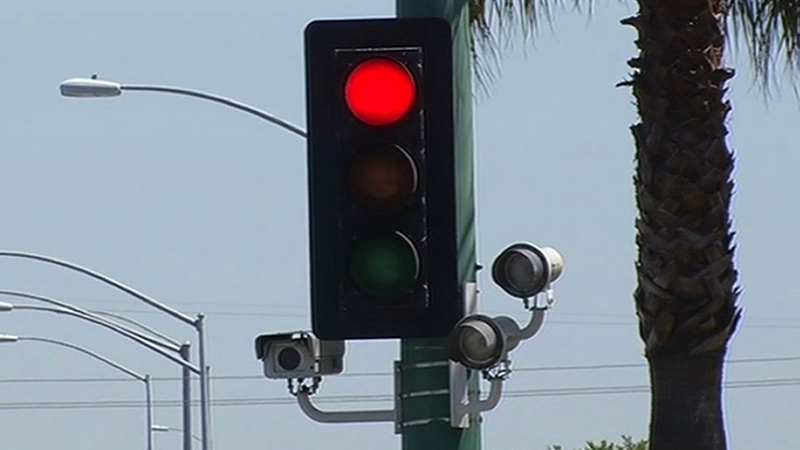 MILLBRAE, Calif. (KGO) -- In one month alone, red light cameras in Millbrae generated over 1,500 citations in it's nine year history.

The majority of citations were issued for right turns, instead of running red lights.

Millbrae's red light cams generate record number of citations in June in its 9 yrs of operation. More than 1,500! pic.twitter.com/VAQLbkkpxr

Three intersections in Millbrae have red light cameras and all of them are on Millbrae Avenue.

One camera captures drivers exiting southbound Highway 101 and is the most prolific, giving out 595 citations in the month of June.

Most of the citations were given to drivers who made a rolling right turn. "She just stopped and then she took a right, like you would normally do, yeah a simple right turn," Alex Quant's said.
Mike Miranda showed ABC7 News an expensive ticket he got for over $400.

According to statistics analyzed by HighwayRobber.Net, Millbrae had a record number of citations totaling 1,555 in June, which is more than any month since the cameras were installed in the city nine years ago.

HighwayRobbery.Net is a blog that tracks red light cameras all over California and said about 90 percent of the citations are for turns mostly rolling rights, which are violations that cause the least number of collisions, but make the most amount of money in fines. "I personally think it's legalized theft," one man said.

Sen. Jerry Hill's bill to reduce fines for rolling rights failed and said cities should not use the cameras to make money. "They look at every opportunity to increase revenue in situations where they're not dangerous," he said.

The question is how much has the city made from the cameras and are there fewer collisions because of them.

A spokesperson for Millbrae said the city needs to analyze its data before getting back to ABC7 News.

Like most other cities with red light cameras, vast majority are for turns, not for running the light straight on. pic.twitter.com/agMBKj6on6