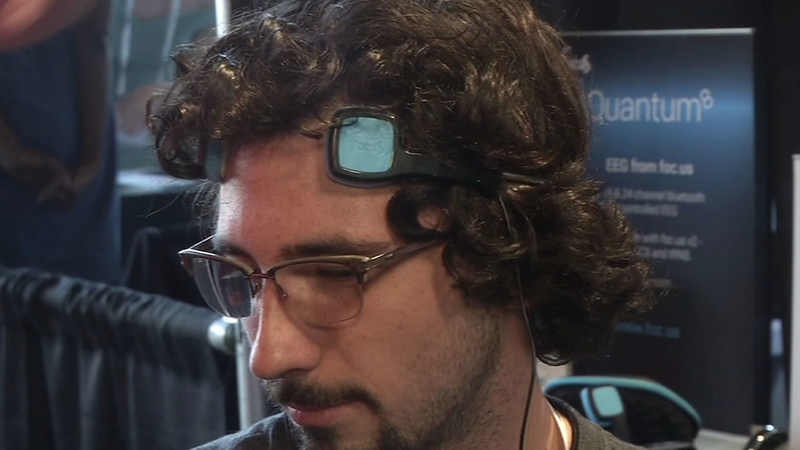 The Bay Area is known for being on cutting edge of technology. Now, we're at the epicenter of a growing movement to use tech devices to help improve our own brains.

With her power of concentration, Hillary Fine's brain is in complete control of a space ship.

"What my colleague is doing is focusing on a single idea and lifting the x-wing out of the swamp," Johnny Liu said.

Her headset, made by Bay Area-based Neurosky, is translating her brainwaves allowing her thoughts to move the spacecraft in an interactive Star Wars game.

The technology is known as EEG and essentially reads the electricity leaving the brain.

But just a few feet away, another type of head set is doing the opposite.

"What's happening is the electricity is flowing across Liu's brain at the moment," Foc.us spokesperson Martin Skinner said.

Instead of picking up electronic signals, the device known as Foc.us is pumping mild amounts of electricity into a volunteer's brain, which developers claim enhances mental performance. "Working memory improvements, mental vigilance, attention span. It's been used in the brain training arena," Skinner said.

The headsets were among dozens of devices being brain tested at the recent Neurogaming Hackathon in San Francisco, a showplace for a new wave of technologies promising to help us optimize our brains. While many of the devices are finding their way to the consumer market, they are still extremely powerful. In fact, many are slimmed down versions of technologies already being used in hospitals and universities.

UCSF Professor Adam Gazzaley, M.D./Ph.D., uses headset sensors and sophisticated 3D projection to track the pathways firing in a person's brain. He believes brain based bio-feedback systems could someday be used to treat conditions from autism to Alzheimer's disease.

In the meantime, one advanced, clinically-tested device is already showing what's possible.

Doctors at Stanford are using the Neurostar to treat depression, by stimulating neural pathways with magnetic signals.

"So it's re-regulation. Taking those circuits and re-regulating those dis-regulated circuits. It sounds complicated, but our brains want to right themselves," Brent Solvason, M.D./Ph.D. said.

"It's just a good, regular feeling without anything else complicating it," Neurostar patient Betta Erickson said.

Outside of the hospital environment, designers of the brain monitoring headsets are hoping to launch a self-help revolution. A world where people can do everything from optimize their thinking, to better control their emotions.

"You'll see in five years systems that will be able to see your nervous system in real time and the brain really is the cutting edge of the future," Neurogaming conference organizer Zack Lynch said.

While they're not being used to treat people for medical conditions yet, many of the commercially available headsets you saw are being used to gather data in research studies around the country.