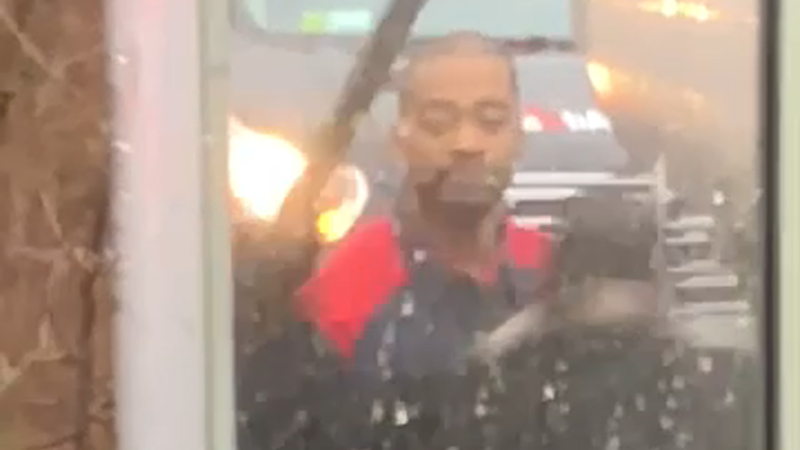 NEW YORK -- New York State Police are investigating an apparent road rage incident in Westchester County Tuesday morning, and video shows a suspect swinging what appears to be a machete.

Authorities say the incident began when a car pulled onto the shoulder to avoid traffic and ended up in a fender bender with an oil delivery truck that was stopped near the ramp.
EMBED More News Videos

New York State Police are investigating an apparent road rage incident in Westchester County Tuesday morning, and video shows a suspect swinging what appears to be a machete.

At one point, the machete broke off, and the blade hit another vehicle.

The truck driver saw it as a moment to jump into action, and the person recording the video also jumped out to help.

"The guy was threatening, said he was going to kill us," witness Kyle Gaedake said. "Once the cop arrested him, he said, 'Wait until I get out. You know what I mean, I have people who are going to take care of you' and blah, blah, blah."

Police say an off-duty law enforcement officer who was driving on the highway saw what was going on and intervened.

The officer identified himself and subsequently subdued the suspect.

Troopers arrived on scene shortly after and took the suspect into custody without further incident. Authorities say his 15-year-old son was also in the car with him.

"It was pretty freaky," Gaedake said. "I mean, I've never been in a situation like that. So, you know, I didn't know what to do. So I just started recording on my phone. That way, I figured, you know, truck drivers stick together."

In court, it was established that he was driving his son to school in White Plains when his car clipped or was clipped by the fuel truck, leading to the confrontation.