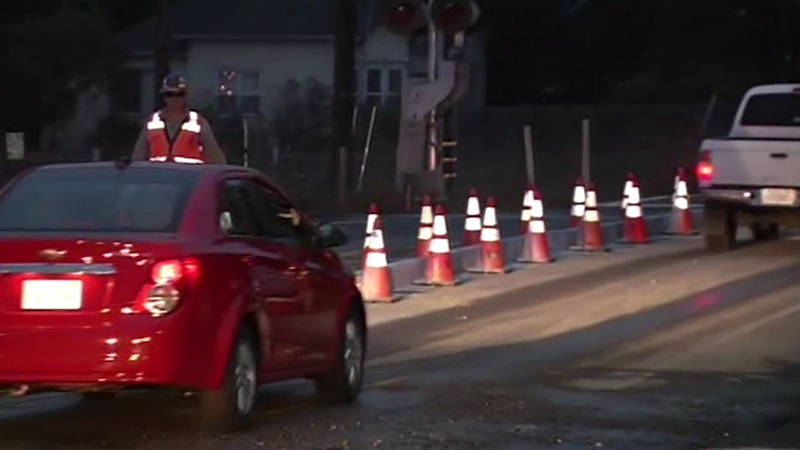 It's pretty much unmarked except by the cars that in the past three weeks have hit it.

It's one of several barriers being added to the middle of some North Bay streets in preparation for the new Sonoma Marin Rapid Transit, or SMART, train. They are meant to protect people who might want to cross lanes to cross the tracks.

"Number one, you can't see them. They need to be taller or wider, but that's terrible," said Larry Courder, a driver.

these barriers in the middle of a bus street...too high? too low? what if you hit one? pic.twitter.com/stpl4ZMFNZ

"We have counted at least five serious impacts. They break the concrete. Then there are skid marks. There is no telling how many of those there have been," said Greg Karraker with the SMART train watchdog group.

Karraker has been a long a critic of the SMART commuter train. He says these new medians have made his job easy.

Even Sonoma County Supervisor and SMART Board Member David Rabbit admitted that there appears to be a gap between theory and execution. He says, "It's a new thing. Not perfect. We will adjust over time. We do not want to compromise safety."

The median in Penngrove, is particularly controversial. As SMART sees it, this is an area with two blind curves. Trains will be approaching at 50 miles an hour. Once the barriers drop, they don't want people trying to get around them.

It's the best solution they came up with after three years said Matt Stevens from SMART. He notes that the California Public Utilities Commission (CPUC), the Federal Railroad Administration and the Sonoma County Public Works signed off on these.

The problem is, they remain unmarked in places.

Contractors says SMART was out there putting out new cones, but believes they were stolen.

Critics, meantime, note reflectors broken off and are lying in the road.

Penngrove Fire Chief Franks Treanor is skeptical. "Well, who gets hurt in the meantime? That is my concern."