EXCLUSIVE: SF woman choked unconscious in attack thanks quick-thinking neighbors for saving her 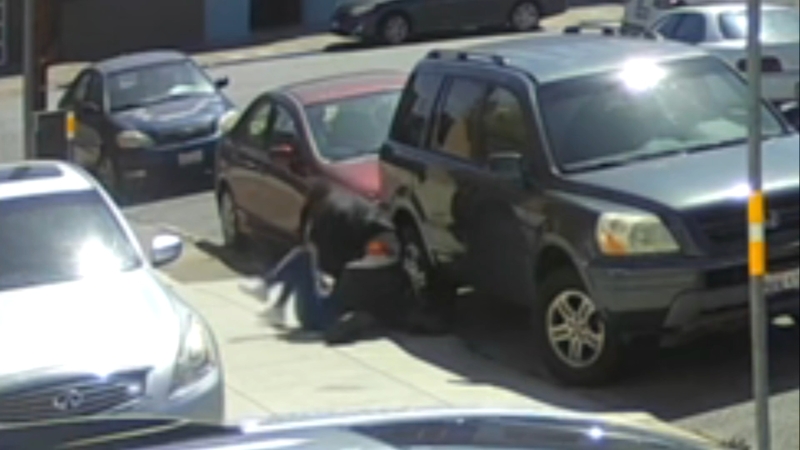 SAN FRANCISCO (KGO) -- A San Francisco woman is thanking quick-thinking neighbors who saved her life after she was brazenly choked and tackled to the ground. Those individuals are now being commended for their actions by community leaders and police.

"I noticed him yelling in the background. That's when he ran after me," says Wendy, who requested we only use her first name. The 28-year-old was soft-spoken and nervous speaking about what happened to her Friday afternoon in Visitacion Valley, not far from Bayshore. That man who was yelling at her, suddenly attacked.

Surveillance video used in the police investigation shows Wendy on her back. You can hear her blood-curdling scream for help.

"He grabbed me, started choking me down. I couldn't yell after that since he was choking me and he had me on the ground," said Wendy.

A Daly City family is offering a $10,000 reward to find the person who attacked their 84-year-old grandfather.

Wendy, who is the mother of a 6-year-old, thought she was going to die and blacked out.

"I was just thinking of my family, my son, praying to God, that someone would come out a see me," said Wendy.

Video shows a man, not necessarily seeing her, but definitely hearing her cry for help, running in her direction. That, according to police, scared the suspect away, saying his quick actions "made a world of difference."

"They're lifesavers. I really appreciate it, I don't know how to thank them for what they did," said Wendy.

I spoke to the man who heard Wendy scream and rushed over to help with his neighbor. He didn't want to go on camera, out of fear for his safety. But says he was put on this earth to help others.

Supervisor Shamann Walton, who developed a public safety plan for his district to address crimes like this, also commended the neighbors for jumping into action.

A statement sent to ABC7 News reads in part, "We commend our Visitacion Valley neighbors, who jumped into action to save and assist the victim in a timely manner. Our office is committed to helping the victim and all victims of crime to connect to any services that they may need following these types of senseless ordeals."

A 71-year old San Francisco woman is considering moving out of the city after being placed in a chokehold in an attempted robbery at her home.

San Francisco's Ingleside Station shared images of the suspect on social media this week and SFPD confirmed they're looking at a possible suspect who is in custody for an unrelated incident but could not confirm his involvement in Wendy's case.

Wendy, who miraculously was not seriously hurt, says until she saves up enough to buy a car - she'll continue to walk. But with precautions. She plans to purchase pepper spray to protect herself from now on and recommends all women be aware of their surroundings while walking alone.