San Francisco ghost town no more? Here's what could change in coming weeks

KGO
By Stephanie Sierra
SAN FRANCISCO (KGO) -- San Francisco may not feel quite like a "ghost town" after two big changes to the city's reopening plan begin in the coming weeks.

The two big expansions include non-essential businesses that can re-open at 25% capacity starting Oct. 27, and restaurants that will be allowed to expand indoor capacity to 50% on Nov. 3.

In fact, San Francisco still has the highest building vacancy rate it's seen in nearly a decade. More than 11 million square feet of office space currently sits vacant across the city. Some companies breaking leases, as uncertainty looms about the future and a vaccine.

"Companies had put space on the market, because they just didn't know what their needs we're going to be after all this," said Robert Sammons, a senior researcher with real estate firm Cushman and Wakefield.

In the last three months, the city's vacancy rate has jumped from 9.9% up to 14.1%, according to Sammons.

The areas hit the hardest are in the Financial District and South of Market - where each submarket went from single-digit vacancy rates pre-pandemic to nearly double those figures.

Walking through San Francisco's South of Market and Financial District feels like a ghost town, as 90-percent of the city's workforce is working from home and people are leaving the city.

Currently there are 7,500 companies leasing building space in San Francisco.

Stephanie: "How many do you expect will actually have employees coming back into the office?"

Sammons: "I think a majority will certainly be coming back...the issue right now is they may need more space per person."

Tech-giant Google can afford the extra space. According to Sammons, the company just expanded its lease by 42,000 sq. ft. to accommodate social distancing.

But, other industries don't have that luxury. Just ask restaurant owner, Tony Marcel.

Marcel owns Wayfare Tavern nestled in the Financial District. He says he can't sustain his business with 50% capacity for very long.

"I could tell you that we probably wouldn't have more than four to seven months like this," said Marcel.

Meantime, like many in his position, Marcel will be adapting to the new guidelines.

Stephanie: "How do you plan to enforce capacity at 50%?"

Marcel: "It's a mathematical equation based upon the occupancy levels that we have in the rooms and in the restaurant."

An equation he's more than willing to do to keep customers' safe.

"We want to take care of each other," Marcel said. "It's all new to everybody, but we'll get through this together."

The city has a Community Education and Response Team (CERT) that is made up of disaster service workers that are handling inspections and complaints.

So far, the city has received 311 complaints about businesses not complying with the health order in San Francisco. San Francisco Police confirmed to ABC7 officers have issued 149 warnings since March -- 82 were to people and 67 were to businesses.

A total of 28 citations have been issued - roughly half were to people not complying to warnings to go home and the other half were to businesses not deemed 'essential' but continued to operate. 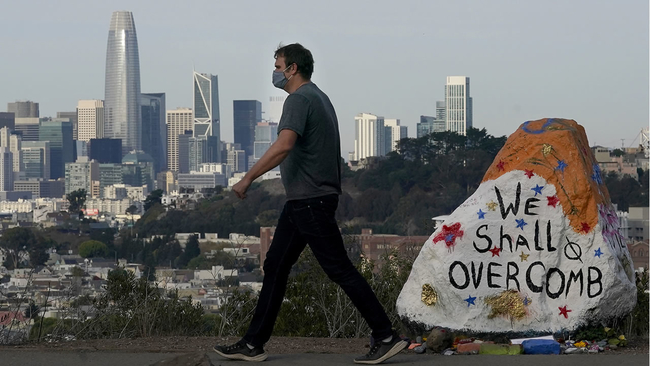 SF could move to purple tier before end of week