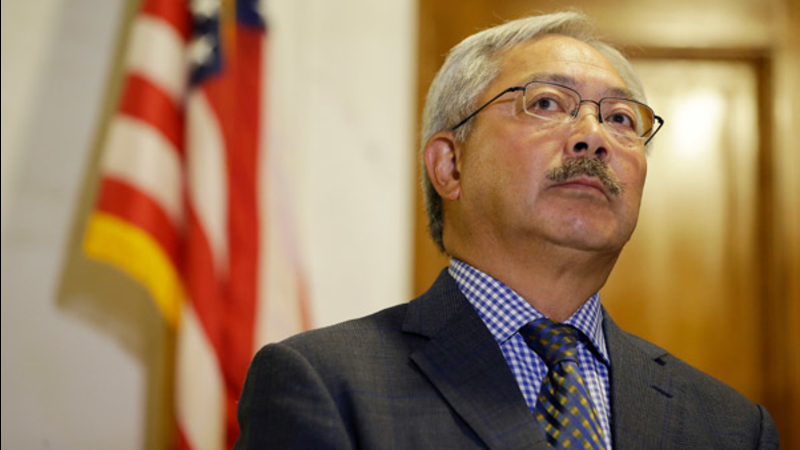 Here's the latest on the death of Lee (all times local):

A spokeswoman for Safeway stores is declining to confirm reports that San Francisco Mayor Ed Lee collapsed while shopping at a store Monday night.

Lee Houskeeper, a publicist and friend of the mayor, says the mayor collapsed while shopping at a neighborhood Safeway.

But she says the store's employees "will miss seeing him in the neighborhood."

A doctor who treated Lee says he arrived at Zuckerberg San Francisco General Hospital in critical condition around 10 p.m. Monday but the 65-year-old died just after 1 a.m.
___

They crowded on a balcony outside the mayor's office on the second floor Tuesday overlooking the building's main floor and swarmed upper floors as Breed gave a short speech honoring Lee as a sweet and humble man who she said never wanted to be a politician.

Sheriff's deputies guarded the door to the mayor's office, where a single bunch of flowers was propped against the wall.
___

A doctor who treated San Francisco Mayor Ed Lee says the mayor arrived at the hospital in critical condition by ambulance shortly after 10 p.m. Monday.

She says an autopsy will determine the cause of death.

No other details will be released now because of the wishes of Lee's family.

A statement from the mayor's office said the 65-year-old Lee died just after 1 a.m. at Zuckerberg San Francisco General Hospital.

A spokeswoman for Safeway, Wendy Gutshall, did not respond to telephone and email messages sent Tuesday morning about what happened after Lee collapsed.

Lee and his wife regularly shopped at the store.

Newsom says he and his wife were heartbroken to learn of Lee's death early Tuesday. Newsom called Lee him a dear friend.
Newsom led the city until 2011, when he ran for California lieutenant governor, his current post.

He said Lee was in Chicago last week in a shared fight against climate change.

Emanuel said Lee was a trailblazer as San Francisco's first Asian American mayor and he was proud to call Lee a friend and colleague.

Lee died just after 1 a.m. at Zuckerberg San Francisco General Hospital surrounded by family and friends after collapsing suddenly at a supermarket. He was 65 years old.

State Sen. Scott Wiener says he was "floored" to learn of the sudden death of San Francisco Mayor Ed Lee on Tuesday morning.

He tells KTVU-TV that he just held a press conference with Lee on Monday and the mayor was his normal friendly and jovial self.

Wiener, a former member of San Francisco's Board of Supervisors, says Lee "wasn't the flashiest guy in the world, but he worked hard and it was an honor to work with him."

Wiener says Lee has not been given enough credit for his work on affordable housing, but he believes he is arguably the most pro-housing mayor in the city's history.

Lee died Tuesday at 1 a.m. at a hospital after collapsing at his neighborhood Safeway store.

Former Mayor Willie Brown says his friend Ed Lee will be remembered as the man who stepped up to bring Silicon Valley to San Francisco.

Lee was a low-key mustachioed mayor better known as city bureaucrat than a flashy politician.

Brown and the late power broker Rose Pak talked Lee into filling out the rest of Gavin Newsom's term when he was elected state lieutenant governor in 2010. Brown said Lee was uncomfortable in the office but as he saw the deep fractions of the city, he thought he could be the healer San Francisco needed to bridge its factions.

Brown says Lee was motivated at all times by a deep love of the city.

The San Francisco Chronicle is reporting that Mayor Edwin Lee has died. He was 65.

The newspaper is citing a statement by the mayor's office that states that Lee passed away Tuesday just after 1 a.m. at Zuckerberg San Francisco General Hospital.

The statement says family, friends and colleagues were at Lee's side.

Lee was not known to be ill. No other details have been released.