KGO
By Amy Hollyfield, Lyanne Melendez and J.R. Stone
SAN FRANCISCO (KGO) -- The city of San Francisco has filed a lawsuit against its own school district in an effort to reopen in-person instruction.

"It's a shame it has come to this. The Board of Education and the school district have had more than 10 months to roll out a concrete plan to get these kids back in school. So far, they have earned an F. Having a plan to make a plan doesn't cut it," said City Attorney Dennis Herrera in a statement.

San Francisco Mayor London Breed didn't hold back when it came to her opinion saying on Wednesday, "Distance learning is not good enough, this is offensive, and completely unacceptable!"

RELATED: Schools can safely reopen even if teachers aren't vaccinated for COVID-19, according to CDC

The lawsuit claims the school district is violating a state law that says districts must adopt a clear plan during the COVID pandemic to offer classroom-based instruction whenever possible - especially for those students suffering serious learning loss. The suit is the first of its kind in California and possibly the country.

"We absolutely have a comprehensive plan. This plan has specific steps around health and safety. It has guidelines as to what the processes would be and what in person learning would look like for our focal student populations to return as soon as we can," said SFUSD Superintendent Vincent Matthews, Ed.D.

RELATED: Gov. Newsom says schools may not reopen if COVID-19 vaccination for all teachers, staff required

The district approved a reopening plan in mid-November. Both the mayor and city attorney criticized it, saying it was and is merely "a plan to make a plan," saying they have instead chosen to focus on other things.

"During that time the school board has alienated parents and made national news for their focus on renaming 44 of our schools, all while there wasn't a plan to reopen those very same schools," says Mayor Breed.

Herrera will file a motion Feb. 11 asking San Francisco Superior Court to issue an emergency order. If granted, the order would require the district to formulate a reopening plan. The statement said such emergency orders, also known as preliminary injunctions, can only come after a lawsuit is filed.

"I am very disappointed that the city has chosen to attack rather than support the school district. UESF has been calling for the city to help with resources, such as COVID testing and vaccines, but this has not happened," said United Educators of San Francisco President Susan Solomon.

"During that time the school board has alienated parents and made national news for their focus on renaming 44 of our schools, all while there wasn't a plan to reopen those very same schools," says Mayor Breed.

As for a city suing their own school districts, law experts say this is extremely rare.

"To have the city take the action of actually suing the school district, that's the first of it's kind as far as I know," says Stanford law professor Bill Koski. Law professor Stephen Sugarman of UC Berkeley reacted to this saying, "I think this is meant to signal that the city side of things, the city and county side of things is on the side of, 'come on it's time to reopen already.'"

The lawsuit comes as four Bay Area counties get the green light to reopen some schools -- those include San Francisco, San Mateo, Marin, and Santa Clara Counties. California's Health and Human Services Director announced yesterday COVID case numbers in those counties are now below the state's threshold for reopening. That means in-person classes can resume at all public K through 6 schools. Higher-grade levels will return when the counties leave the Purple tier.

The AP has contributed to this report. 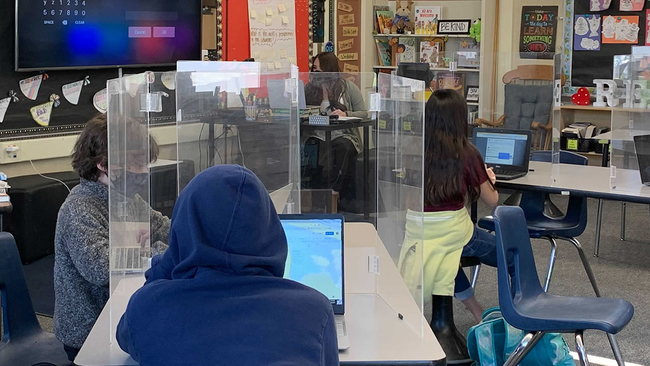