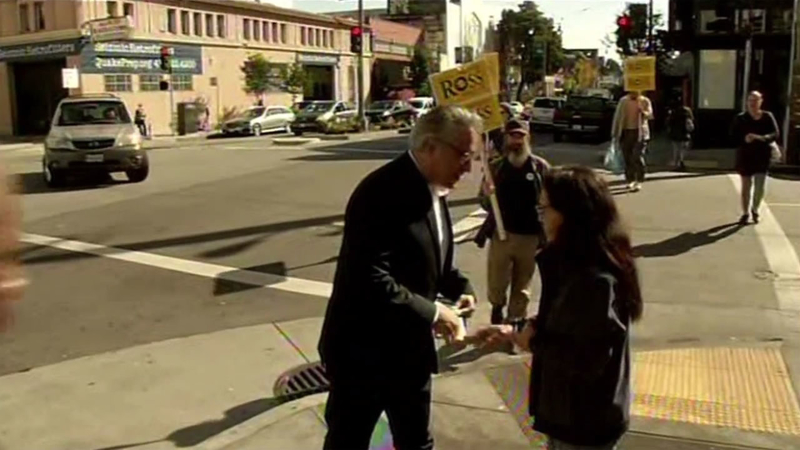 SAN FRANCISCO (KGO) -- One of San Francisco's most hotly contested races is the one for sheriff. Many say incumbent Ross Mirkarimi is fighting an uphill battle against a former sheriff's official. He has been a colorful but controversial office holder.

Mayor Ed Lee and Vicki Hennessy started the day off auspiciously, eating breakfast at the Good Luck Dim Sum shop before they campaigned on Clement Street.

"Honestly, I just want to bring leadership back, communication back and make sure we have a professional sheriff's department," Hennessy said.

Live 2016 Election Day Results
The big night is here. Voters throughout the Bay Area counties and the country have cast their votes. Here's are all the latest results.

Mirkarimi campaigned on Divisadero and Grove streets. He's running as the most progressive sheriff in the country.

"We now have one of the most under-crowded jail populations in the country, the fastest drop in recidivism in repeat offender rates," he said.

Pundits say Mirkarimi is fighting for his political life, mostly because of embarrassing official and personal incidents. It began shortly after he was elected sheriff when he bruised his wife Eliana Lopez's arm on New Year's Eve 2011. He was charged with domestic violence but later pleaded guilty to a lesser count of false imprisonment.

There was an escape of a drug gang lord from his jail and the highly publicized accusations by a prisoner that guards were staging fights among inmates.

Last year, another embarrassment when deputies failed to find a patient whose body was later discovered in a stairwell at San Francisco General Hospital weeks after she disappeared from her room.

Then, this summer an undocumented Mexican national, who had been deported numerous times, was accused of fatally shooting Kate Steinle on Pier 14.

This, after he had been released from Mirkarimi's jail even though federal immigration officials asked that his office detain him.

Recently, more faux pas; Mirkarimi had his driver's license suspended for failure to report an accident and he flunked his test at the shooting range, which means he can't carry a service gun.

Mayor Ed Lee has made his position very clear on this race.

"I do think that a more professional approach to leading that office is needed," Lee said.

One thing's for sure, voters have a real choice in this race.