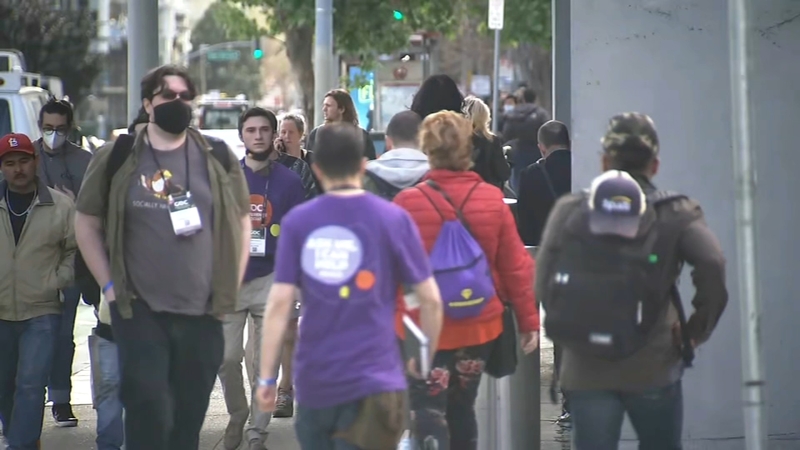 SAN FRANCISCO (KGO) -- Traffic was bad Thursday night during rush hour in San Francisco. Some drivers told us it felt like before COVID-19 pandemic.

There's a hope that the city will see more events like this as we work to get back to where we were.

Out-of-towners are back in San Francisco this week, coming from far and wide.

"I live in Florida, been here four days so far!"

San Francisco Mayor London Breed is on a mission to bring international travelers back in hopes of benefitting the entire Bay Area's economy.

There were two major events Thursday, the Game Developers Conference over at the Moscone Center, and March Madness at the Chase Center. Many attendees were traveling for the first time in a long time, and doing so with the Bay Area as the final destination.

But while the economy is coming back in San Francisco, it's doing so at a fairly slow pace.

"A lot of that has to do with remote work. Of all major metro areas, we tend to have more remote work eligible jobs, so that has kept people at home," says Jeff Bellisario of the Bay Area Council. Bellisario says the gamers convention and the basketball tournament are positive signs that could help shape a new narrative of San Francisco going forward.

St. Patrick's Day block parties and pub crawls are back in San Francisco for the first time since 2019.

"When I was coming, a lot of people were like, 'oh be careful in San Francisco it's not what you think it is', but honestly I have not had any issues here," says Carlos Claverie, who was attending the Game Developers Conference from Florida.

"I'm definitely going to come back. I got to check out the touristy stuff, didn't get to do that," said Megan Mcnulty of Montreal.

"I haven't been here since 1990 right after the (1989 Loma Prieta) earthquake, so it's great to be back," said Melissa Harwood-Rom who was in town from Arkansas.

Even rush hour traffic had a pre-pandemic feel to it Thursday evening, but Bellisario says we've got a ways to go as the high cost of housing continues to drive people and jobs elsewhere.

"From an economic standpoint, in terms of the recovery in the leisure and hospitality industry, we're still very, very, very far behind, still around 20 percent of those jobs are gone, many small businesses have shutdown or downsized," said Bellisario.

But with more conventions and activities happening every day, there is hope of a rebound, sooner rather than later.