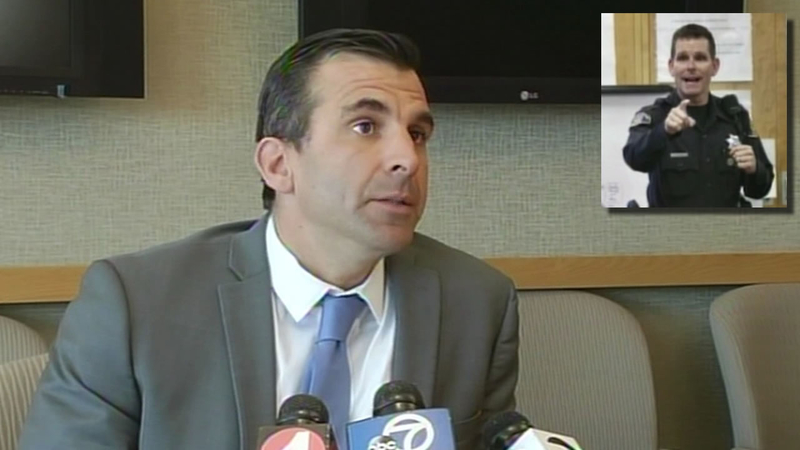 SAN JOSE, Calif. (KGO) -- San Jose Mayor Sam Liccardo wants the officer who tweeted violent messages against the Black Lives Matter movement kicked off the force again. Officer Phillip White was fired, but got his job back after he appealed. Now, the mayor wants to try again.

This controversy lives on and the NAACP says it wants to challenge the arbitration ruling in court and on Tuesday, Liccardo said he wants the city council to consider that as well. However, White's attorney, Michael Rains told ABC7 News that any challenge in court would be absurd.

"It does not help our department to have an officer who has clearly been engaged in this kind of communication, coming back to the force," Liccardo said.

What Liccardo is referring to are the violent tweets sent by White just over a year ago. Tweets directed against Black Lives Matter supporters. For example, he tweeted: "Threaten me or my family and I will use my God given and law appointed right and duty to kill you. #CopLivsMatter"

Another tweet his wrote said, "By the way, if anyone feels they can't breathe or their lives matter I'll be at the movies tonight, off duty carrying my gun."

The tweets led to protests. After an investigation, then-Police Chief Larry Esquivel fired Phillips, but he was re-instated earlier this month after appealing his dismissal through binding arbitration.

The ruling said the firing was too severe given White's unblemished 18-year record as a cop and his community service.

But Liccardo wants the city council to challenge the ruling. He told ABC7 News, "The chief needs to be able to have the latitude to make personnel decisions, to respond in a way that sends a clear message to the community and to the force about the kinds of values San Jose Police Department stands for."

City attorney Richard Doyle says overturning the arbitrator will be tough. He said, "There needs to be some egregious violation of the law or the arbitrator did something totally wrong."

And Doyle says there's no evidence any of that happened. The city council takes this up next week.

The department says Officer White is assigned to a desk job and is not on the streets.