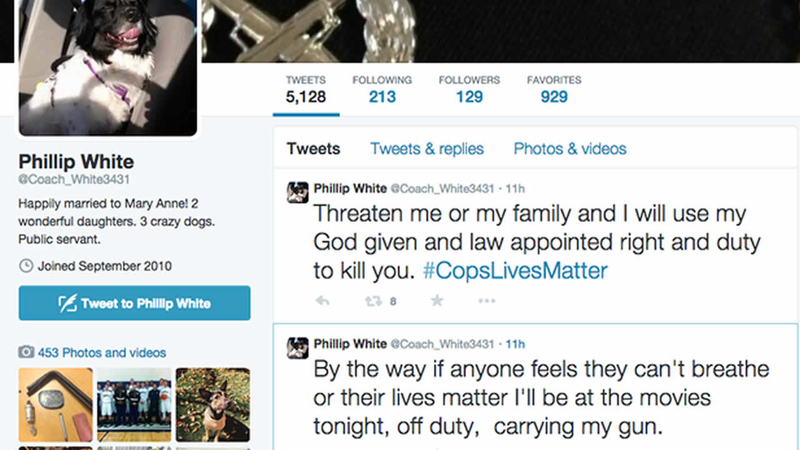 SAN JOSE, Calif. (KGO) -- A South Bay civil rights group handed over a petition to San Jose police on Thursday night. The petition calls for the firing of Officer Phillip White, who is currently suspended for tweets that threatened protesters outraged by the Michael Brown and Eric Garner cases.

More than 15,000 people have signed an online petition that asks for the department to fire White. Thursday's event ended in the late afternoon after demonstrators delivered that petition.

It was a call for change and a march for peace as people gathered in San Jose to bring attention to what they say is a pattern of racial inequality here at home.

A group of civil rights activists are calling for San Jose Police Officer Phillip White to be fired over controversial tweets, Thursday Dec. 18, 2014.

"When people of color come into contact with law enforcement, is there equal enforcement or is there discriminatory treatment?" asked Richard Konda with the Coalition for Justice and Accountability.

Konda serves as chairman of the Coalition for Justice and Accountability, the organizer for Thursday's event. Among other issues, they're demanding the immediate firing of White.

The officer is accused of sending a series of questionable tweets, including one that reads: "Threaten me or my family and I will use my God given and law appointed right and duty to kill you. #CopsLivesMatter."

Another reads: "By the way if anyone feels they can't breathe or their lives matter I'll be at the movies tonight, off duty, carrying my gun."

San Jose Officer Phillip White has been placed on leave after posting controversial comments about recent protests on Twitter.

White has been placed on administrative leave as the investigation continues.

Community members say regardless of where people fall on the opinion spectrum, this is a conversation worth having.

"We're absolutely emboldened and excited about this national energy to re-examine police accountability, and we think it's important for San Jose to be a part of that national dialogue," said Raj Jayadev with Silicon Valley De-Bug.

A group of civil rights activists are calling for San Jose Police Officer Phillip White to be fired over controversial tweets, Thursday Dec. 18, 2014.

ABC7 News reached out to the San Jose Police Department on Thursday. But they say they won't be commenting on this matter until an internal review is complete.