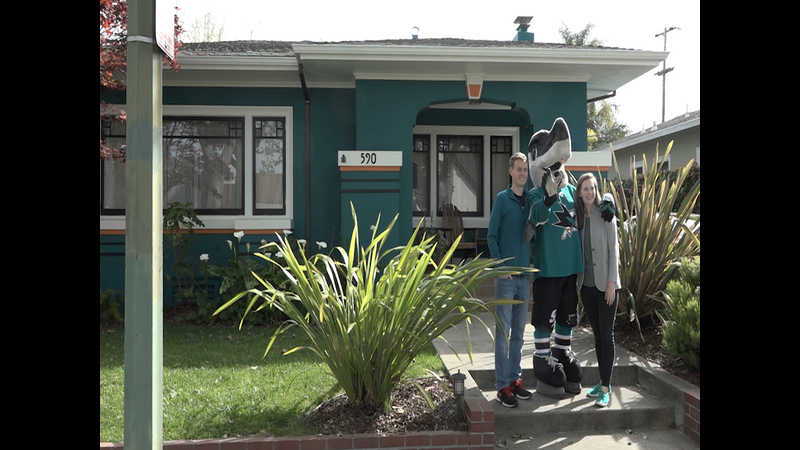 SAN JOSE, Calif. (KGO) -- Two Sharks fans in San Jose have taken their fandom to the next level.

Zach and Caitlin Jones received the first of five new "Teal Homes of Sharks Territory" as the team looks to give back to the best fans in hockey.

Thousands of fans applied to get their home re-painted by Brilliant General Maintenance and the Sharks in the traditional teal, black and orange colors to show team pride.

Welcome home Jones Family! This is the 12th Sharks for Life Teal home in the Bay Area. @sjsharkie was one of the first houseguests to check out the new digs! pic.twitter.com/I5HzbXX3BZ

The Jones' home is house #12 the organization has completed.

"We went to a game in November, we just moved in, and we saw the promo during one of the intermissions," Zach Jones said. "We said 'hey that would be kind of fun', never thinking that we would actually win. When we found out a few weeks ago that we won, we knew we had to do it."

The Sharks players are often vocal about how fans in San Jose provide some of the best "home-ice" advantage in hockey.

Former Sharks defenseman Douglas Murray says these homes take it all to the next level.

"For me sitting in the locker room, it was literally vibrating before we go out for a playoff game. It's just so special," Murray said. "Then when you see things like this in the community, it just adds to it. When I first heard about it, I though this was going to look weird. But every house I see, I'm actually very impressed with how great it looks. Daniel Montas and his crew did a great job."

Each home is created to the exact specifications that the home owners choose.

"It's quite a teal color," Zach Jones said. "It's awesome. We weren't sure exactly how it would turn out. We were trying to picture it, but you can't really see it until it's on the walls."

"They let us pick where we wanted some of the orange and the other colors and how we wanted the final look," Caitlin Jones said. "It's mostly teal, which is good, because we actually really like that color a lot. We just mixed and matched what we wanted, they were great with that."

The San Jose Sharks fans have committed themselves to the team in a very unique way, so the team wanted to thank the "Sharks For Life" in a unique way as well.

Zach and Caitlin moved to San Jose from the East Coast.

Presenting Teal House #12! These Bay Area residents (and super fans) won a @SanJoseSharks contest to have their home painted in teal — plus, they got a visit from @sjsharkie! More contest winners to be announced in the coming weeks. #SharksForLife pic.twitter.com/D0M5dlDsf9

Now that they are rooted in the Bay Area, their fandom, like their house, will always be teal.

"We may be further down towards the crazy end of the fan spectrum now," Zach Jones said. "Now that we live this close, we want to be all-in on the Sharks and hope they make a deep run this year. If this little bit of excitement helps push them over the edge, we're all for it."