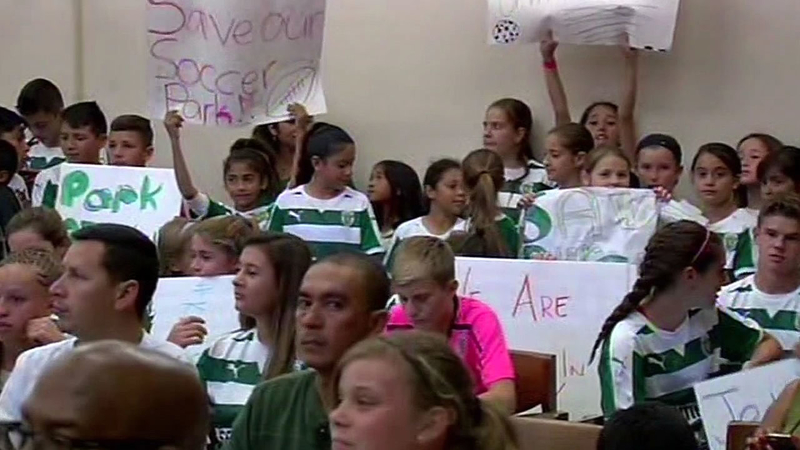 SANTA CLARA, Calif. (KGO) -- The 49ers aren't making any new fans in a group of people furious about plans to replace children's soccer fields with a parking lot for the new stadium. Tuesday night parents, kids, and coaches put pressure on the team to make things right.

Santa Clara youth soccer supporters upset over a proposal to lease city land to the San Francisco 49ers, which could put parking as a priority over kids sports.

"I really like that field and I don't want them to turn it into a parking lot," 8-year-old Ana Sedic said.

Levi's Stadium has a documented parking problem and the organization is perhaps green with envy over the 11 acres currently dedicated to soccer fields.

San Francisco 49ers chief operating officer Al Guido presented to city council a $15 million cash down payment to the city, $3 million to the schools, a percentage of parking revenue, and a 39-year lease plus options for the parking spots.

"The soccer community is looking for an equal replacement for our soccer park facility," Gabe Foo, a board member of the Santa Clara Youth Soccer League, said.

For several hours people urged the council to decline the offer. An equal or better field location has not been identified and many fear displacement.

"So we've heard that the value of the land alone is $70 million," Foo said.

As land value in Silicon Valley soars higher than any soccer ball, others urged council to follow good business practice and not to take the first and often low offer.

"Tonight it was a proposal, it was a start. It wasn't final. It can be tweaked it can be worked on," Guido said.