They were caught on video safely guiding the animal across the road as drivers waited patiently for it all to clear.
KGO 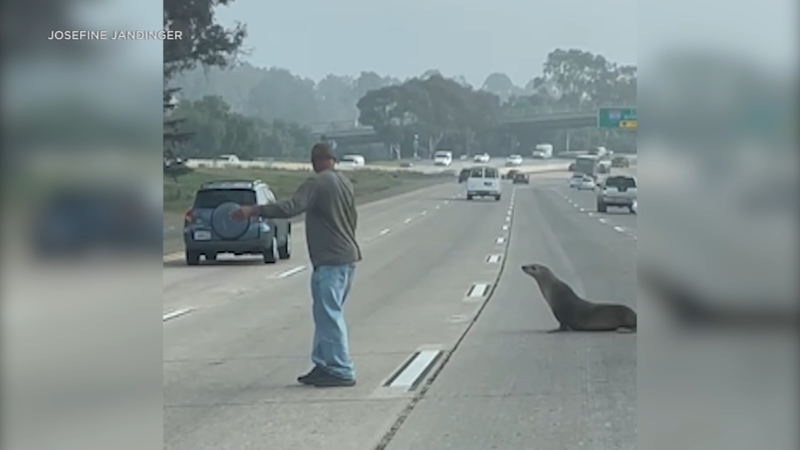 SAN DIEGO -- Drivers on a California freeway came across an unusual sighting on Friday, and it was all captured on video.

A sea lion -- that may have lost its bearings or been struck by wanderlust -- roamed onto state Route 94 in San Diego, stopping traffic while concerned motorists, California Highway Patrol officers and SeaWorld personnel rescued the wayward aquatic animal.

The errant sea mammal appeared on the eastbound side of the freeway near SR-15 -- about three miles from San Diego Bay and some eight miles away from the ocean -- shortly after 9:30 a.m., CHP public-affairs Officer Jim Bettencourt said.

Two good Samaritans were caught on video safely guiding the animal across the road as drivers waited patiently for it all to clear.

Josefine Jandinger, who recorded the video, said she was stunned to see the marine animal crossing the freeway, miles from the ocean.

"I couldn't believe what I was seeing," she told San Diego's KGTV. "It was the craziest thing I've ever seen."

Jandinger said the two good Samaritans -- a man and a woman -- directed traffic around the animal to make sure it didn't get injured.

The sea lion can be seen slowly crossing the freeway.

Crews with the SeaWorld San Diego rescue team were able to safely capture the animal with the help of the California Highway Patrol.

The team said they're not exactly sure how the sea lion made its way that far inland.