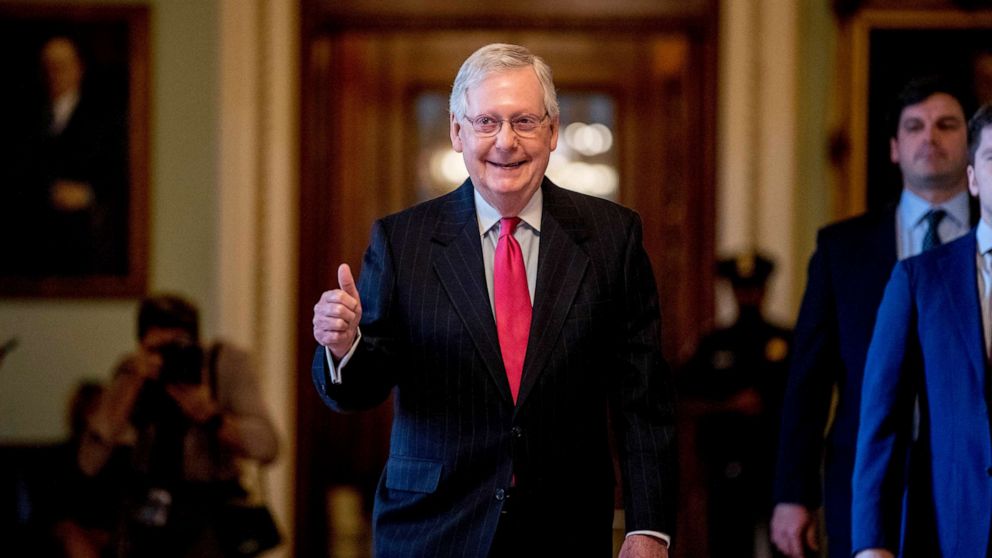 After haggling all day, the Senate voted late Wednesday night 96-0 to unanimously pass a sweeping $2 trillion relief package - representing the third congressional effort to respond to the COVID-19 pandemic.

Senate Majority Leader Mitch McConnell observed that the upper chamber, which was deeply divided down partisan lines over impeachment earlier this year, had shifted from "one of the most contentious, partisan periods in the nations history to passing this rescue package."

"I think one of the reasons that happened is we are inspired by what is going on around the country," McConnell, R-Ky., said. "People are helping each other, people are reaching out, looking for ways to make a difference, following the directions of the healthcare professionals, this is a proud moment of the United States senate and for the country and we are going to win this battle in the very near future."

"It's a historic day because it matches a historic crisis. And our people need help," Senate Minority Leader Chuck Schumer, D-N.Y., said. "People came together to help the American people. And that's a great sign. It shows you that the Senate can function when the need is so real and so pressing."

The bill now heads to the House, where Speaker Nancy Pelosi announced lawmakers will vote Friday morning to send the measure to the president's desk.

"Our nation faces the worst pandemic in over fifty years. Urgent action continues to be needed to address this threat to the lives and livelihood of the American people," Pelosi, D-Calif., wrote in a statement early Thursday morning following the Senate vote. "On Friday, the House will take up the legislation with strong bipartisan support."

Due to the limited flight options, members participating in self-quarantine, and several states mandating stay-at-home orders, congressional leaders announced that the House will vote to approve the bill by voice vote - without the need for all members to return to the Capitol to participate in a recorded roll call vote.

"In order to protect the safety of Members and staff and prevent further spread of COVID-19 through Members' travel, the Republican Leader and I expect that the House vote on final passage will be done by voice vote," House Majority Leader Steny Hoyer, D-Md., announced Wednesday night. "Members who want to come to the House Floor to debate this bill will be able to do so. In addition, we are working to ensure that those who are unable to return to Washington may express their views on this legislation remotely."

McConnell announced the Senate will not meet again for legislative business until April 20. The upper chamber will still meet every few days for pro forma sessions, where additional measures may be considered amid the ongoing crisis. Once the bill clear the House, the lower chamber is also expected to take a long recess while the country recovers from the pandemic.

Senate Republicans downplayed concessions given to Democrats throughout the marathon negotiations, arguing Senate Minority Leader Chuck Schumer "delayed life-saving aid to medical professionals and significant relief for families and small businesses in order to claim credit for wins that are either bipartisan or Republican ideas."

"Reading Chuck Schumer's list, we half expected that the next thing I read would be the minority leader taking credit for inventing fire," a senior Senate GOP aide said. "The reality is that almost every significant "win" he's taking credit for, is actually a Senate Republican idea."

Tune into ABC at 1 p.m. ET and ABC News Live at 4 p.m. ET every weekday for special coverage of the novel coronavirus with the full ABC News team, including the latest news, context and analysis.

The aide claimed Senate Republicans "never objected" that oversight of the Economic Stabilization Fund be structured in the mold of Troubled Asset Relief Program (TARP) oversight, or that the bill would include billions of dollars to shore up hospitals.

"What Schumer and Senate Democrats actually wanted was to create a completely new structure that would have given subpoena power to a new panel that would have had oversight of the entire Trump administration pandemic response," the aide argued. "From the beginning, when Leader McConnell laid out four pillars of phase three, unprecedented aid to the nation's hospitals was a primary element. There was always going to be tens and tens of billions for our hospitals in the CARES Act. Sen. Schumer's attempt to take credit for an increase in hospital aid is nonsensical because there was no opposition."

Wednesday afternoon, a quartet of Senate Republicans objected to a provision in the massive unemployment insurance expansion in the package that they say could mean that some Americans could be paid more to be out of work than they were earning before they were laid off or furloughed because of the pandemic.

In the unprecedented expansion of jobless benefits in the relief bill, each worker would receive a $600 weekly check for four months -- on top of the customary benefits doled out by states.

Sen. Lindsey Graham, R-S.C., who pushed for the expansion of these benefits, said he and three other GOP senators -- Rick Scott of Florida, Tim Scott of South Carolina and Nebraska's Ben Sasse -- are demanding an amendment to the bill that would cap benefits for the jobless at 100 percent of a worker's pay before he or she was out of a job.

"This bill pays you more not to work than if you were working," Graham said, contending the bill would pay the unemployed roughly $24 per hour, on average.

The provision, which aides said was not a drafting error, was negotiated by the Trump Administration, Finance Committee Chairman Chuck Grassley and senior Democrats, including Schumer and Ron Wyden, the ranking Democrat on the Finance Committee.

Unemployment insurance, which is administered at the state level through individual programs, was not conducive to imposing a brand new federal bureaucracy to dole out emergency benefits, Republican and Democratic aides who were close to the talks explained. Senate negotiators chose to come up with a national average wage in order to arrive at the $600 weekly figure, and the bill would have the states take on that financial burden on the front end only to be repaid by the federal government.

Ultimately, the problem was just a hiccup, with the four introducing an amendment that would cap unemployment benefits, but it failed in a vote late Wednesday.

All politics are local, and beyond exerting public pressure to lobby the Senate to improve the bill, this is a package that most members of the House had little direct sway in crafting. That has generated apprehension that a single member -- Republican or Democrat -- could scuttle efforts to pass the Senate agreement without calling all of the House's membership back to Washington to cast a roll call vote.

Scalise's whip team convened a conference call Tuesday where a source expressed optimism that all lawmakers won't need to return for a vote -- and that they won't have to change the rules to achieve that.

Whenever a vote is called in the House, the member presiding over the House asks all in favor to say "Aye!" - and all opposed -- "No!" This generally provokes each side to yell out their votes and the member presiding over the House as Speaker Pro Tempore rules on whichever side he or she believes prevailed. Only then does a member - usually from the losing end - stand to request a recorded vote.

The way GOP leaders see it, their members could still shout "NO!!!!!" and be satisfied that they expressed their opposition without forcing a roll call vote. But it remains an open question whether all members would be content without a recorded vote.

"It only takes one member to object to trying to pass this via [unanimous consent], which is a very real possibility that we recognize," a whip team source acknowledged. "However, passing this by voice vote remains a possibility. We have discussed this with various factions of our conference, and believe this is a possible outcome. Strong Republican support for the bill is evident at this point."

During an appearance on PBS prior to the Senate vote, Pelosi said she does not believe the House will be able to pass the stimulus bill by unanimous consent.

"No I don't think we can get unanimous consent," Pelosi said. "I think there are a number of people who are working their way here on the Republican side for sure -- maybe the Democrat side -- to object to unanimous consent."

She also acknowledged the House could approve the measure by a voice vote.

New York Gov. Andrew Cuomo is already warning that the agreement is "terrible" for New York -- even though Schumer, the senior senator from the Big Apple, had an outsized role negotiating the deal.

House Democratic leaders are also conferring with each other as they await a Senate vote, and working to hold off the left flank of the party from upsetting the bipartisan vibe.

While Pelosi refused to fully endorse the agreement as she awaited the legislative text, her statement Wednesday morning outlined several victories Democrats are emphasizing in order to unite the caucus -- while admitting the agreement does not match the Democratic priorities spelled out in their own proposal.

"This bipartisan legislation takes us a long way down the road in meeting the needs of the American people," Pelosi stated. "While the compromise does not go as far as our Take Responsibility for Workers and Families Act, thanks to the unity and insistence of Senate and House Democrats, the bill has moved a great deal closer to America's workers."

More than a dozen representatives remain in self-quarantine as two other members of the House recover from the coronavirus.

As with the two previous phases of Congress' response, leaders are attempting to assuage any consternation among their members by promising future waves of relief in the coming weeks and months.

"I've already directed my staff to begin identifying additional priorities for Rhode Island. In the weeks ahead, I will continue working with Gov. Raimondo and my colleagues in the Congressional Delegation to ensure we leave no stone unturned until this crisis has ended," Cicilline, D-R. I., noted in a statement Wednesday.