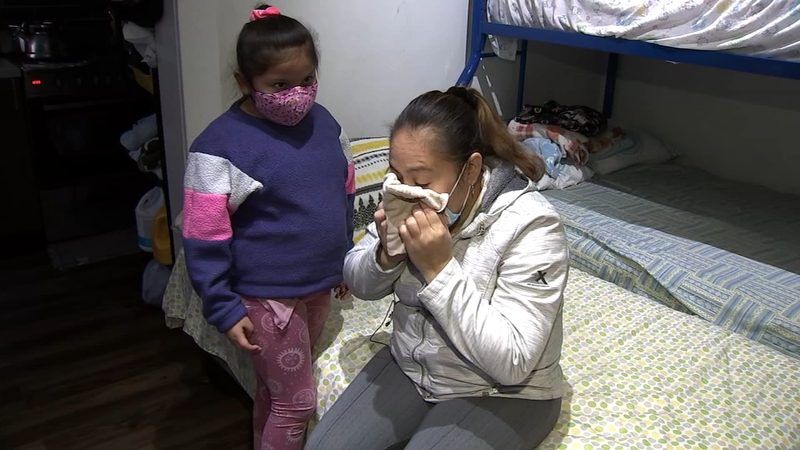 SAN FRANCISCO (KGO) -- Last week, we told you the story of Mercedes Hernandez and her 7-year-old daughter. They were at risk of being evicted from their San Francisco apartment.

Just minutes after the story aired you called asking how to help. They have now raised over $15,000 through a GoFundMe she opened.

On Tuesday, ABC7 news reporter Luz Pena visited Mercedes to see how your donations have made a difference in their lives.

This could've been a story of another family ending up homeless in San Francisco but instead, 174 of you came together as a community to avoid an eviction.

Luz Pena: "I'm going to call Marcia one of the many people who donated."
Marcia Garcia: "It's one of the things that COVID has brought out the best in people. We realize that we are all a community."

"You know hearing her story in your segment my heart just went out to her. The fact that she has a 7-year-old kid and they were facing this consequence of not being able to pay the rent," said Mario Balestrieri, Daly City Resident who donated.

Mercedes was one month behind in rent owing $1,600. You raised close to $16,000 giving them several months of rent while Mercedes recovers from eye surgery. On Tuesday, we knocked on that door.

Next to Mercedes was her 7-year-old daughter, Jazmin. Last week, Jazmin had her bags packed.

Luz Pena: "Were you shocked to see all the people that helped you guys?"
Yasmin Hernandez: "Yes, I just feel so surprised and I never knew this was going to happen ever. Ever."
Luz Pena: "Were you worried?"
Yasmin Hernandez: "I was so worried. I didn't know what to do, but this happened and I just thank all the people that helped us."

For the first time, Jazmin told her mom about the burden that was lifted. She hadn't been sleeping imagining herself and her mom sleeping on the streets.

"Every night. I don't know why I was thinking that and now I just feel so happy," said Jazmin Hernandez.

RELATED: 24,000 San Franciscans are behind on rent, some on the verge of homelessness

Now the bond between this mom and daughter has been strengthened by faith and the help of a hundred strangers.

For Mercedes, Jazmin's peace is the biggest gift.

Several organizations reached out to help Mercedes avoid eviction with legal aid. One of those groups was Homeownership San Francisco. They say there is hope before an eviction.

Shannon Way wants to encourage anyone facing eviction to reach out to their coalition for help. She said every case needs individualized help. Some people might benefit from a COVID relief fund.

"Whether you are approved or denied for that program that actually can stall the eviction and make it so that no eviction happens," explained Way.