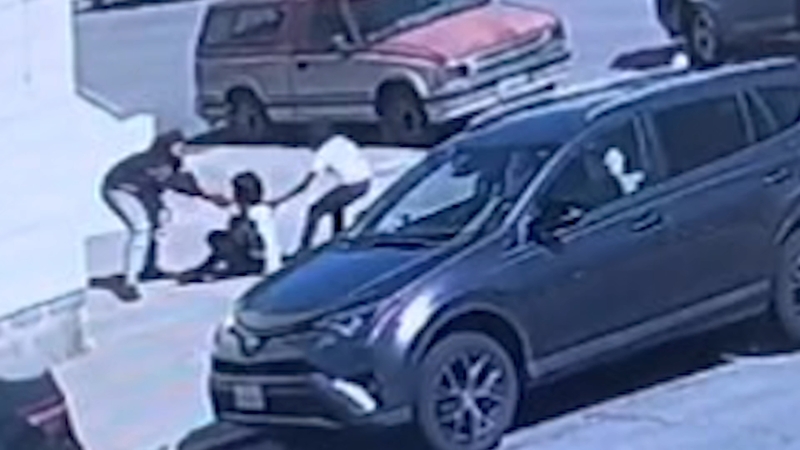 SAN FRANCISCO (KGO) -- Residents in one San Francisco neighborhood say they're fed up after yet another frightening assault and attempted robbery in broad daylight that was all caught on surveillance video. It's not the first incident of it's kind I've covered in the Portola District in the past couple years.

"Three guys parked car right here," says Joe Buttle, who has lived in his Portola home his entire life. "They were waiting for her. As soon as she came up, they jumped her. He kicked her a couple times in the face."

He says incidents like this one, which happened just before 4 p.m. on Saturday, are sadly nothing new.

"I saw a person across the street," he said. "Lost his backpack. They came right up to him and took his backpack right off his back. Lady next-door...(someone) jumps out of the car, grabbed her purse."

A San Francisco girl scrawled "help...robbers!" on a wall in the bathroom she was forced to stay in by one of two men who ransacked her family's home in the Portola district of San Francisco Friday afternoon.

In the past couple years, I've covered a number of attacks on Asian Americans in the same neighborhood off San Bruno Avenue. In March of last year, 55-year-olds and 60-year-olds were shoved to the ground and robbed just one block away. A Portola home was invaded with an 11-year old girl inside, and cellphone video also captured a woman being victimized in an attempted cellphone snatching.

"It's getting worse, it's happened quite a few times in a year, it's really frustrating," said another neighbor who only wanted to be identified as "Chris."

Neighbors also believe criminals target this area because of the proximity to the freeway just a few blocks away, making for an easy getaway.

Supervisor Hillary Ronan issued a statement in response to this latest incident: "This violent attack on a woman walking in our Portola neighborhood is shocking and tragic. I have been in touch with Bayview Station Captain Maron who is working diligently with SFPD officers to investigate this incident and arrest the suspects involved. The community-based safety team through the Street Violence Intervention Program also plays an active role in working with victims and community to engage and de-escalate where there is potential for retribution and continued violence. I have reached out to offer support and services to the victim and will continue to do everything I can to keep our constituents safe."

In the meantime, neighbors like "Chris" have given up hope saying "there's no way to prevent" the crime, while others, like Buttle, have their own ideas on what needs to change.

"They gotta do something to these criminals," he said. "They're not rehabilitatable. Put them in jail, they're back out doing the same damn thing."

SFPD tells ABC7 News one suspect is believed to be a juvenile and no arrests have been made in this case. Anyone with information is asked to come forward.