Santa Rosa man recounts Florida shark attack, says it's likely he'll get back in the water 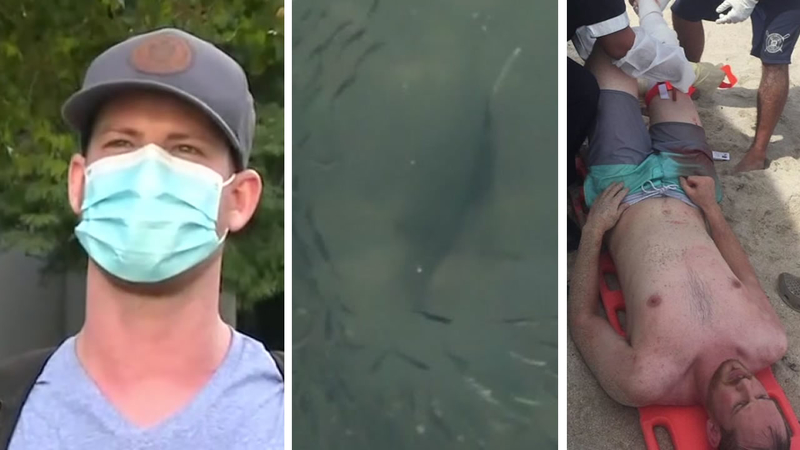 SANTA ROSA, Calif. (KGO) -- A Santa Rosa man says he's lucky to be alive after being attacked by a shark in Florida.

31-year-old Mark Bowden was bitten in the leg while body surfing in Miami Beach Wednesday.

"I said did you feel that and he said 'no'!" That was Bowden referring to the moment when he was bitten six times by a shark. Officials believe it was either a black tip shark or a baby bull shark.

"I was probably up to here in the water and it just felt like something punched my leg really hard. Saw how there was a big chunk taken out of it and I don't know, luckily it didn't hurt at all," says Bowden who was then able to get out of the water and run to a lifeguard stand as he bled. "You know, I've heard shark teeth are like surgeon's scalpel blades, they're just so sharp. And so, I think it was a mix of that and adrenaline. I didn't feel any pain," he said.

Seconds later Bowden's girlfriend could be seen holding up his leg as paramedics worked to stop the bleeding.

Listen to a mother's frantic 911 call as her son is attacked by a shark while snorkeling in the Florida Keys.

In a phone conversation Thursday, Bowden told ABC7 News he was body surfing and excited to do so along the famous South Beach while on vacation with his girlfriend. He says there were so many fish in the water and he felt like one with nature before the attack.

While Bowden did have to have surgery and stay overnight at the hospital he is now out and expected to make a full recovery.

In fact he hasn't ruled out eventually going back into the water, "I think at some point I'll go back in, plus, I'm thinking, what are the chances of having two shark attacks? That's gotta be zero."

Bowden owns an organic tea company in Santa Rosa called Tea and Trumpets. He sells at farmer's markets and to restaurants, cafes, and grocery stores.