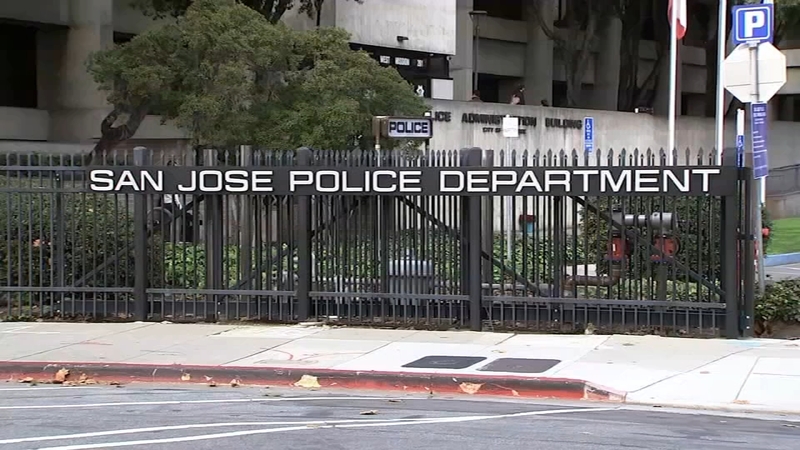 SJPD officer accused of sexual misconduct while responding to call

SAN JOSE, Calif. (KGO) -- In the South Bay, there are disturbing allegations surrounding a San Jose police officer, accused of performing a lewd sex act inside a home while responding to a call.

It comes only days after the city and police department announced a crackdown on officer misconduct.

This new, more detailed information comes after the police department confirmed on Tuesday that an investigation into sexual misconduct was going on.

The City of San Jose and San Jose Police Department say they have had enough of police officers tarnishing the department's reputation.

"That officer was immediately placed on administrative leave, there is an investigation into that. We will coordinate with the district attorney's office and any criminal charges that are appropriate will absolutely be sought and any disciplinary action will be taken," Assistant Chief Paul Joseph said at the Tuesday press conference.

Police Chief Anthony Mata announced on Friday, he wants to make changes to the department's disciplinary process. This would include better transparency for the public when he believes termination is the only option.

ABC7 reached out to the police department about the allegations and received a statement from the police chief:

On Tuesday of this week, during a press conference press conference, I made it clear that I will not make excuses for criminal conduct from a Police Officer. We are and should be held to the highest standards. That is what the public expects of us and what I expect of the men and women who serve and protect San José. Let me start by sharing my commitment to transparency. The days of saying this is a "personnel matter" are over in the San Jose Police Department. My administration and I will share what we can when it comes to investigations. Although the amount of information we can provide may be limited, we will provide it. I would like to propose changes to the disciplinary process that will allow me to speak openly with the public about cases where I believe termination is the only option. If true, any conduct similar to what has been alleged will result in termination as quickly as the system allows me to do so. It will also include criminal prosecution and decertification as a Police Officer. One of the greatest challenges as Chief of Police are the limitations on what I can say regarding misconduct investigations. The law and Officer rights must be taken into consideration. There are also limitations on how fast I can officially fire an Officer in a case like this. Hence, why I stood before our City on Tuesday to share my expectations. l reiterate - when an Officer violates the public's trust, they will be held accountable. When an Officer is convicted of criminal conduct, I will personally walk them out the door. I also stand behind the following words: "To the men and women of the San José Police Department: do not, let me repeat, do not let the actions and behavior of a few impede the outstanding work you do daily. To all who wear a uniform, wear a badge, and represent this profession in an unsullied manner I apologize. When any Officer, regardless of the agency, county, or state, tarnishes the badge we all suffer the consequences."

On Friday, ABC7 News spoke with retired Superior Court Judge LaDoris Hazzard Cordell. She is also a former Independent Police Auditor for the City of San Jose, having served for five years.

"I don't believe the San Jose Police Department is rife with officers who are engaging in misconduct," she said. "The problem is when officers engage in misconduct that draws so much public attention, it tanks the entire department."

The alleged misconduct is keeping the agency under a microscope.

In addition to the sexual misconduct investigation, an alcohol abuse investigation is ongoing after allegations that an officer showed up drunk to the Brandon Cuellar kidnapping investigation.

"If these officers are determined to have engaged in misconduct, one repercussion or consequence is that they could be decertified," Judge Cordell added. "That is, they could no longer be in law enforcement. And they couldn't just hop over from the San Jose Police Department to another police department."

"Chief Mata has now said he set the bar high and says there will be transparency as much as the law will allow," she commended. "And it is my hope that the law will be reformed to allow even more transparency."

Now, the department that has been long described by city officials as the most thinly staffed police department of any major U.S. city has two fewer active on the force. Both officers under investigation are on paid administrative leave.

PD officials told reporters the department will coordinate with the County District Attorney's Office on any criminal charges.

"We know that the community deserves better," Pritchard said. "Our men and women deserve better."

He said the recent allegations are not reflective of the men and women who he believes serve every day with integrity and honor. There's also an investigation into the death of officer DeJon Packer, who died of a Fentanyl overdose while off-duty.

"These are extremely isolated incidents, albeit that they've happened in a short amount of time," Pritchard added.

"A lot of this, especially recent is making this take a very hard look at our hiring standards or background processes," he said. "And really trying to figure out and determine did we miss something because the caliber of San Jose police officers out there is far exceeds anything across this nation."