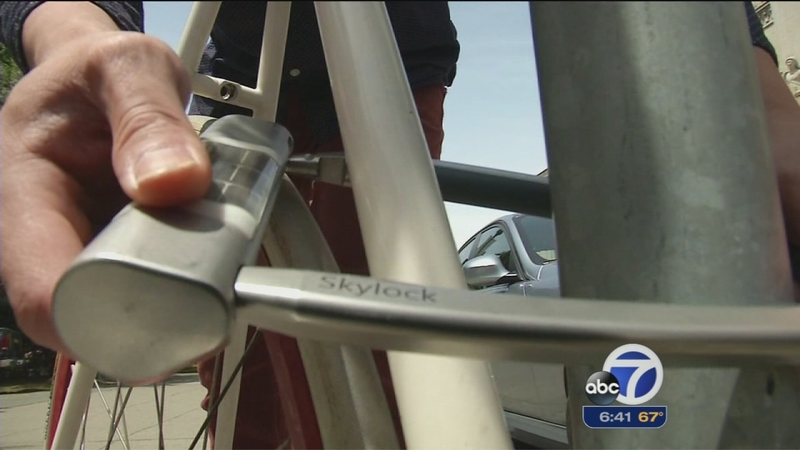 SAN FRANCISCO (KGO) -- Bicycles may be the cheapest, greenest and healthiest way to get around the city, but there's a downside -- they're easy to steal. But a team of engineers says they have a plan to fix that.

It's a sad, but common story. Elena Salomatova was on a college campus in broad daylight while she was studying, a thief sawed through the heavy-duty u-lock and rode off on her bike.

"It's almost statistically impossible not to get your bike stolen in cities like San Francisco and New York if you leave them out," Velo Labs CEO Jack Al-Kahwati said. "And so we're trying to curtail that problem using Skylock,"

Skylock is the brainchild of engineers who used to work on tanks and airplanes. Al-Kahwati left his job at Boeing to make the bike lock.

"The bike lock looks unassuming, but it's actually a little robot stuffed inside a metal enclosure," Al-Kahwati said.

With solar panels to charge it, Skylock has two motorized latches -- thieves have to make two cuts to get it open. You can't pick it, because there's no keyhole. The key is your smartphone -- just like some newer cars, it senses when you're right next to it and the latch opens allowing the users to pull it apart.

But the killer feature is theft alerts. The lock can ring your phone if someone jiggles it around.

It needs Wi-Fi -- which is getting easier to find in big cities.

Though it's not even on the market yet, Skylock is already getting endorsements from passers-by, including one who knows an awful lot about bike theft.

"I think the idea's pretty good; I'd like to see the bike thieves put out of business," San Francisco Police Ofc. Fred Crisp said.

Crisp says Skylock could be a deterrent for casual thieves.

"It's like putting a lock on the steering wheel; people are going to go to a car that doesn't have one of those," he said.

It's also for safety. In a crash, their video shows the lock asking if you're OK and offering to call for help.

If it catches on, at $159, the makers have another vision -- using it for bike sharing and even renting out your bike since the key is digital.