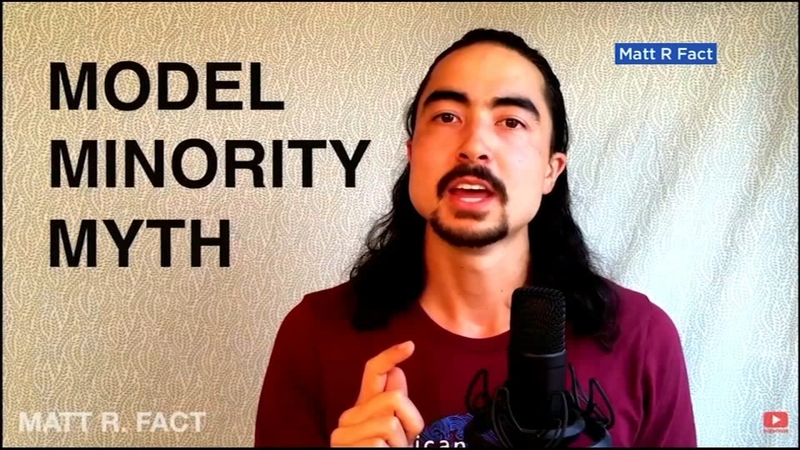 BERKELEY, Calif. (KGO) -- When is being considered smart, hardworking and obedient not a compliment? For many Asian Americans, it's when it's the model minority myth.

Khatharya Um became the first Cambodian American woman ever to earn a PhD in 1991. Yet, she couldn't apply to many programs and fellowships.

"Because Asians are not considered an underrepresented minority group in many academic programs," the program coordinator of the Asian American and Asian Diaspora Studies at UC Berkeley tells us.

RELATED: Our America: The history of stereotypes and its impact on Asian-American communities

She says some 30 years later, only 14% of Cambodian Americans have an undergraduate college degree.

Um believes that reality contrasts with the model minority myth.

While the communities and cultures vary, one thing binds them together: they are all Americans.

Matt R. Fact is a content creator and social worker. For this Korean American, the model minority myth is personal.

"People have always thought of me a certain way and imposed certain stereotypes about how I look," Fact said.

Hannah Chea is a junior at UC Berkeley and a member of the Cal Marching Band.

The difference between the model minority myth and her own experience confused her.

"I think just growing up, there's just a lot of different things I couldn't put my finger on," said Chea.

She wondered why she doesn't see many other Southeast Asian Americans in higher education, and why do so few of them even graduate from high school?

It scared her that her refugee parents from war-torn Cambodia show symptoms of Post-Traumatic Stress Disorder (PTSD).

Daniel Wu is an actor and producer best known for his lead role on the AMC series, "Into the Badlands."

This Oakland native and Chinese American spent 20 years in Hong Kong working as an actor and grew up seeing the model minority myth as a positive.

"And then as I became an adult I realized what the machinations of it are; and how it is related to systemic racism and its pitting people of color against each other," Wu said.

"Now it's time to be schooled to the truth, don't be fooled by the model minority myth," Matt R Fact rapped in his song.

For him, the myth places Asian Americans inaccurately on a pedestal.

Um agrees and says the myth ignores an immigration system which prioritized educated Asians already excelling in their professions.

It also promotes the belief that if minorities aren't succeeding, it's because they aren't working hard enough.

"It shifts the focus away from the structural racism and other barriers that deterred the advancement of people of color, " Um said.

Matt R Fact's single speaks out about the lies this myth upholds.

"The notion that we're all the same and successful is based on a sinister ruse and untruth. It's a justification of racist beliefs about other minority groups," Fact said while rapping.