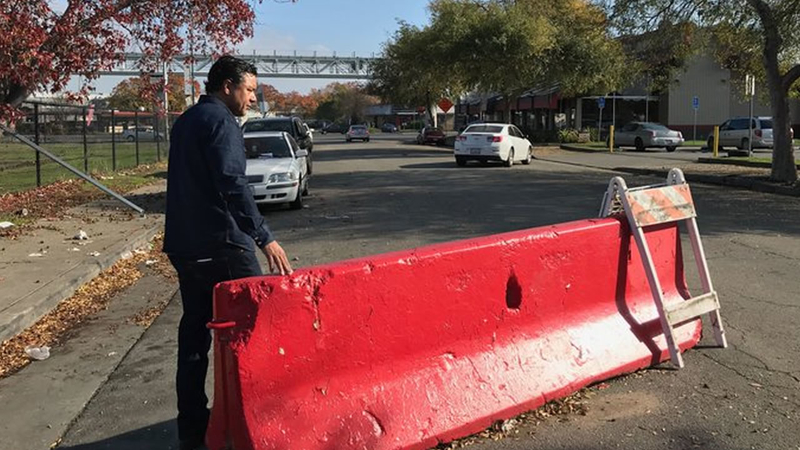 OAKLAND, Calif. (KGO) -- Community advocate Ken Houston says he got so desperate, he put up K-rails to block homeless RVs from parking near the building he owns by the Coliseum in Oakland.

The K-rails block a short dead end street and were put up a year ago -- and they have worked.

Houston says he himself has lived in an RV in Oakland for two years in the past and knows what that's like. He also knows what it's like to be a property owner and an Oakland resident who feels trapped by the growing homeless problem. He says many say they are unable to walk down the sidewalk or enjoy a park and feel safe.

Houston says, "People were urinating in front of seniors, in front of children. I got bit by a dog, my worker got hit by a pipe. And out of desperateness, you have to take desperate actions... I even did it."

He called the city to complain but says they dropped off Porta-potties and a wash station and he thought it was going to get exponentially worse. So he brought in the barriers and, a year later, there are no RVs parked there.

Out of desperation this community advocate in Oakland says he put these illegal k-rails up to keep homeless RVS from parking by his business. And it’s worked. #abc7news pic.twitter.com/fmojHgqEn8

This is just like another citizen on Poplar Avenue, who hauled in giant logs to keep homeless RVs out. But as a community advocate, Houston has decided to go public with what he calls the unheard voices of Oakland residents.

He said, "They feel like they're trapped in their own homes. They are worried about retribution from the homeless. That's what they say to me. If I confront them, I'm scared. They know where I live and I don't know where they are going to go and they can come back and hurt my house, my family or me. This is what the public is saying."

Houston is suggesting the city take a huge city-owned overflow parking lot south of the Coliseum and use the land as overflow for RVs to get them off the streets of Oakland.

The city of Oakland says they are currently operating a 46 RV site in East Oakland and a 17 RV site in West Oakland but more space is needed.

Houston claims, 'We are less empathetic. The people are getting tired of it. They're seeing it. They have to live with it."