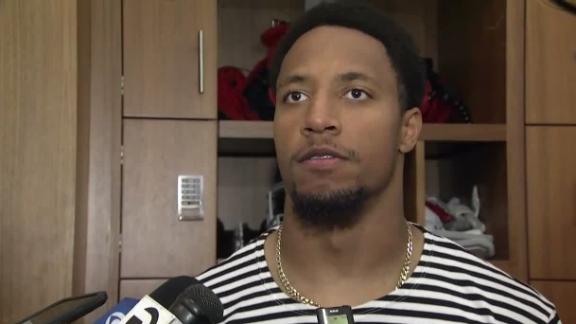 TheSan Francisco 49ers'Eric Reid and Reuben Foster expressed their disappointment Sunday with fans' reaction to quarterbackC.J. Beathard's injury, which led to to Jimmy Garoppolo's debut with the team.

Beathard suffered a left leg injury with 1 minute, 7 seconds remaining in Sunday's game against the Seattle Seahawks during a big hit as he attempted a pass, forcing him to depart. Some fans, realizing that Garoppolo was about to enter the game, began cheering while the rookie quarterback was still down on the field.

"Our starting quarterback got hurt, and people are cheering before he even stands up, and that pisses me off, so I'm disappointed in our fans," Reid said following the 49ers' 24-13 loss. "I understand the excitement about Jimmy, he's a great player, but that's not right."

Beathard walked to the podium for his postgame news conference with a slight limp and will undergo an MRI on Monday. Beathard also said he felt pain in his hip. Coach Kyle Shanahan said the optimistic hope is that it was just a bruise.

"It's disappointing that when a man is hurt -- people don't understand what we go through as football players. And what our bodies go through. And he's laying down on the ground and people are cheering. That's messed up," Reid, a veteran safety who has also played linebacker this season, said.

Foster, the 49ers' first-round pick this season, echoed Reid's sentiment and said he was rooting for Garoppolo too -- but not until he was sure Beathard was OK.

"I was disappointed in them when they were cheering," Foster said. "Our fans are better than that. It's a fact that our starting quarterback is down, who's been making plays and really taking his body into a lot of things that a quarterback shouldn't be getting into ...

"You would think someone would see that and say, 'I love the quarterback.' Jimmy, great guy, I'm happy he was out on the field. I was rooting for him too, but at the same time, I have to wait and make sure my brother on the ground is [OK] before I cheer for Jimmy. I'm going to cheer for my brother when he gets off the ground because he's all right. And then I'm going to cheer for Jimmy."

Veteran left tackle Joe Staley agreed that the fans cheering while Beathard was injured was "kind of a bad look," though he said he doesn't think it was malicious.

After entering the game, Garoppolo promptly scrambled for 4 yards, threw a 9-yard completion to receiver Aldrick Robinson and then evaded pressure before throwing a 10-yard touchdown pass to wideout Louis Murphy as time expired. It was the first touchdown the 49ers scored against the Seahawks in two meetings this season.

According to Shanahan, that quick cameo won't influence his decision this week.

"Those plays have nothing to do with anything," Shanahan said. "That's just running around, and he made a great play, but no, those have no bearing on it at all."