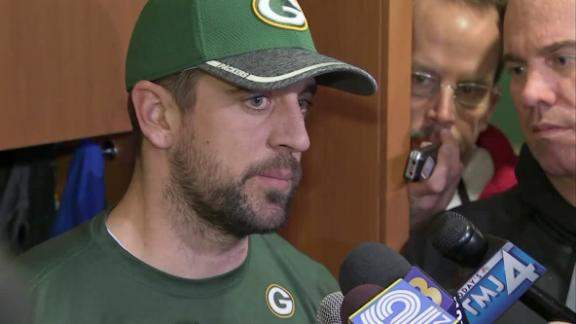 GREEN BAY, Wis. -- No one would rule out receiver Jordy Nelson for Sunday's divisional playoff game at Dallas, but quarterback Aaron Rodgers made it sound like the Green Bay Packers would need to beat the Cowboys in order for Nelson to have a chance to get back on the field.

Nelson, who sustained a significant rib injury in last Sunday's wild-card win over the New York Giants, did not practice on Wednesday. He isn't expected to even try to do anything until Saturday.

He was at Lambeau Field on Wednesday but was not seen inside the Don Hutson Center during practice. Nelson spent Sunday night in the hospital for observation.

"It's tough," Rodgers said Wednesday. "We've played a lot of football together. You realize how important these opportunities are, how they don't come around every single year. We feel great about our team. Obviously, we feel better with 87 in the lineup. He's a classy guy and a great teammate. I was with him last night and the night before. He's staying positive and he's hopeful.

"We're going to try to get this one and hopefully get him back if he can't play this week."

During his return this season from the torn ACL in his right knee that kept him out all of the 2015 campaign, Nelson led the Packers with 97 catches, 1,257 yards and 14 touchdowns.

"He's been a warrior all season," Rodgers said. "I don't think he's missed a practice hardly all season. Different without him out there, but we're hopeful he's going to be able to heal quickly and be able to go."

Earlier on Wednesday, Packers coach Mike McCarthy said Nelson would work with the rehab group. Others who did not practice on Wednesday were linebacker Julius Peppers (veteran's day off for rest), running back James Starks (concussion), center JC Tretter (knee) and receiver Jeff Janis (quad). Among that group, only Janis attended the practice.

On Monday, shortly after Nelson was released from the hospital, McCarthy said he would hold Nelson out of practice Wednesday and Thursday. The team doesn't practice Fridays, but McCarthy said there was a chance Nelson could try to practice on Saturday during the Packers' short workout before they fly to Texas.

McCarthy said that if Nelson didn't practice on Saturday, then he wouldn't play against the Cowboys.

When asked whether the plan was still for Nelson to practice on Saturday, the coach said Wednesday, "I'll talk to you Friday."

"He's here, he's been here all day," McCarthy added. "So yeah, he's making progress. Frankly, I haven't really spent much time with him, doing other things. But you know, he's doing good. I'll tell him you said hello."

Nelson did not talk with reporters on Wednesday.

When asked how difficult it would be to play with broken ribs, Rodgers said it would be almost impossible for a quarterback.

"I'd try to, but there's so much twisting and turning with a quarterback that I think it'd be pretty difficult," he said.

Packers receiver Geronimo Allison said the same thing is true at his position.

"It would be very tough," said Allison, who added that he plays without a rib protector. "Those ribs down there where you're breathing at, it would be tough, especially if you take a shot in there again. It could really mess [you] up."