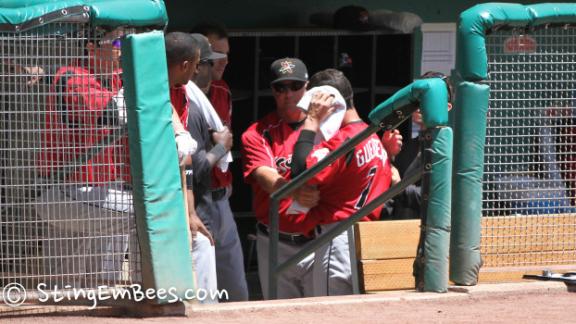 ESPN
By Danny Knobler
Alex Guerrero, the Cuban infielder the Los Angeles Dodgers gave $28 million this past winter, and Triple-A teammate Miguel Olivo were involved in a dugout altercation during Albuquerque's 7-4 loss to Salt Lake on Tuesday.

Guerrero was taken to a local hospital. His agent, Scott Boras, told ESPN.com that Olivo bit off part of Guerrero's ear and Guerrero was having plastic surgery on his ear.

Salt Lake City police told ESPN.com that they visited Guerrero in the hospital but he told them he didn't want to file a report until after talking to a lawyer.

A call to Olivo's agent was not immediately returned.

The argument began on the mound during an Albuquerque pitching change in the bottom of the seventh inning and continued in the dugout in the top of the eighth, at which point the altercation became physical. The disagreement began with Olivo getting upset that Guerrero failed to tag out a runner after a throw from Olivo, the Los Angeles Times reported, citing Boras.

Both players were removed from the game, and it's possible one or both could be subject to further action from the team.

The Dodgers released a statement saying they were aware and investigating the incident, and general manager Ned Colletti said he had already spoken to the Isotopes' coaching staff about it.

Colletti wouldn't say what caused the altercation but admitted the Dodgers weren't happy with it.

"We don't condone it, and we don't think it's constructive," Colletti said at Citi Field, where the Dodgers were to play the New York Mets on Tuesday night. "People can have disagreements. When it gets beyond that level, it's over the limit."

Colletti wouldn't answer the question of whether the Dodgers would keep either or both out of the lineup as punishment.

Guerrero played for the Dodgers on the season-opening trip to Australia but has been with Albuquerque since the Triple-A season began. Olivo, a 35-year-old veteran catcher in his first year in the Dodgers' organization, was sent to the minor leagues last week when A.J. Ellis came off the disabled list.

Olivo has displayed a hot temper on the field before, charging at Jose Reyes and missing with a wild punch during a dustup between the Marlins and Mets late in the 2007 season. He appeared in eight games for the Dodgers this month, marking his 13th season in the majors.

The Dodgers signed Guerrero with the idea that he could play second base in the big leagues, but he has struggled defensively. He has hit well at Albuquerque, with a .376 batting average with 10 home runs and 29 RBIs, and the Dodgers have started giving him playing time at other positions.

The idea, Colletti said, is that Guerrero could be ready to fill in if one of the infielders gets hurt or could come to the big leagues as an extra player who could fill in at multiple positions.

"We've had good offensive performances from our infielders," he said. "We think offensively, [Guerrero] is very close. Defensively, he still needs repetition."

Guerrero had been particularly hot lately, with 21 hits in 46 at-bats (.457) over the past 11 games, with six home runs and 17 RBIs. He went 2-for-3 on Tuesday before being removed for a pinch hitter in the eighth inning, shortly after the altercation with Olivo.

Olivo came out of the game at the end of the inning.