Alex Rodriguez 'won't be answering the phone' after Yankees finale 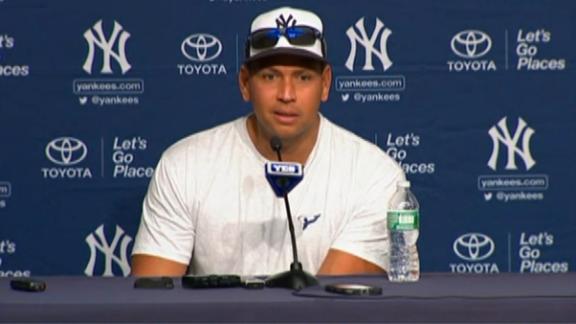 NEW YORK -- Alex Rodriguez will play his final game for the New York Yankees on Friday night and, as of now, the only thing he's planning for Saturday morning is a hangover.

"If I wake up on time tomorrow, I would watch tomorrow's game," Rodriguez said in a news conference before the Yankees' game against the Tampa Bay Rays. "But I may have a couple of cocktails tonight, so I may not wake up by game time tomorrow. But I'll definitely watch Sunday's game."

Rodriguez is batting third in the Yankees lineup against Chris Archer, after which he will be unconditionally released by the club following 11-plus seasons, two AL MVP awards and one World Series title.

Thereafter, he will be a free agent for the first time since the brief period in 2007 when he opted out of the 10-year, $252 million contract he signed with the Texas Rangers in 2001 that became the property of the Yankees when they traded for him before the 2004 season.

Technically, he can be approached by -- and can sign with -- any of the 29 other clubs, who would be obligated to pay only a pro-rated portion of the major-league minimum salary to acquire his services, the bulk of the remainder of the 10-year, $275 million contract he signed after that 2007 opt-out to be assumed by the Yankees.

Rodriguez was asked if a phone call from another team would be difficult to resist, especially since he sits just four home runs shy of 700, a plateau reached by just four other players in big-league history.

"Well, unless it's Hal, I probably won't be answering the phone for anyone," Rodriguez said. "I'm going to go and take a nap for a minute. I need some rest, kind of recover and reflect; spend some time with my two little ones. It's been a great run and an incredible journey. I never thought when I first entered Fenway Park as an 18-year-old that I would play for 10 years, forget 22 years. I'm going to take some time for myself."

After a surprising 2015 season in which he hit 33 home runs despite missing all of 2014 while on suspension for PED violations in connection with baseball's Biogenesis scandal, Rodriguez has struggled throughout 2016, hitting .199 with nine home runs and 30 RBI in 64 games as a designated hitter. Rodriguez, in fact, struggled in the last two months of 2015, hitting just .191 after July 31.

And the consensus within the upper managementof the Yankees is that Rodriguez' struggles are not just an extended slump.

"We just haven't seen the explosiveness and the production that we'd seen the first four months of last year,'' Girardi said. "This is not just this year. It happened in August and September of last year, and when you get to a certain age, whenever you struggle, the first thing they're going to ask,is he too old? As an athlete, those are things that you have to deal with. I don't ever put anything past someone. I'm not ever going to say someone can't do something, but what we've seen has led us to make this decision."

Rodriguez' final game caps a tumultuous five days that began with an emotional news conference Sunday at which it was announced he would be released as a player but was given the option of continuing with the Yankees organization as a special advisor, an option he indicated he would accept.

General manager Brian Cashman made it clear that Rodriguez was free to change his mind, or to play for another team if he so chose. A team source indicated that the offer would remain even if A-Rod accepted an offer from another team.

"I do not believe Hal would pull it off the table,'' the source told ESPN. "Hal's a good guy. He's a good person. I don't think it ever got bad between Alex and Hal.'

Said Rodriguez: "Hal has given me an opportunity to stay involved with the organization. With all my screw-ups and how badly I've acted, the fact that I'm walking out the door and Hal wants me as part of the family, that's hitting 800 home runs for me. That's something I'll be able to share with my daughters for a long time.''

Rodriguez, however, admitted that his relationship with Girardi has been strained over the past month. Before Thursday night in Boston, Rodriguez had started just one game since July 22 -- and, despite his wishes, started just one of the Yankees' three recent games against the Red Sox.

"It's been very difficult,'' Rodriguez said. "I said it's been awkward and difficult. But we are a family and we've had a wonderful relationship for the last 10 years. It's been really good. Families have disagreements and that's OK,. He has his opinion and I have mine. But in the long run, we're going to be fine."

And even while sidestepping the question of whether he would play again, neither did Rodriguez rule it out.