Allen Iverson: Had to overcome 'naysayers' to make Hall of Fame 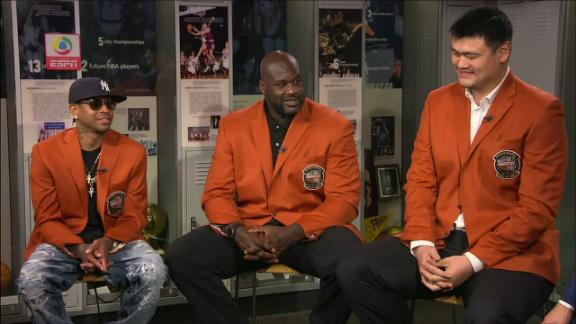 SPRINGFIELD, Mass. -- On the eve of his induction, Allen Iverson was in vintage form during Thursday's festivities at the Naismith Memorial Basketball Hall of Fame.

Iverson, one of the headliners in the 10-member Class of 2016, arrived tardy and missed a jacket ceremony, then engaged in an enthralling half-hour question-and-answer session with reporters that culminated with an emotional Iverson fighting back tears as he thanked those who aided his journey to the Hall.

The Class of 2016 will be inducted Friday night at Springfield Symphony Hall.

Organizers initially stalled the scheduled 2 p.m. start, before announcing Iverson would be tardy. Settling into his chair in front of a throng of reporters after the jacket event, Shaquille O'Neal playfully needled Iverson's no-show.

"I don't know how you miss this," O'Neal said, before altering his voice to spoof Iverson's infamous "practice" rant. "Hall of Fame? I'm a franchise player. You talking about the Hall of Fame?!"

About 90 minutes into the two-hour event, Iverson arrived wearing paint-splattered jeans, a black T-shirt, gold chains and a New York Yankees cap. He slipped into his Hall of Fame jacket before sitting down for media duties.

Asked about his late arrival, Iverson said simply, "Personal situation. Family." When pressed on the matter, he playfully barked, "That's the first thing you want to know about me?" and steered the conversation to his basketball career.

Iverson answered basketball-related questions for most of his session but commended a reporter who asked whether he ever had two-sport aspirations. He wondered aloud if he could have been the best player in the NFL.

Toward the end of his session, Iverson was asked about those whom he played alongside. He fought back tears as he spoke.

"That's the only thing that got me here is my teammates," he said, his voice trembling. "My teammates and my coach. That's the only reason I'm here. All those guys sacrificed their game and sacrificed different things for me to be honored like this and what I've done. Without them, it wouldn't have happened.

"Without my coaches putting me in a position to succeed. Mike Bailey did it my high school level, coach [John] Thompson did it at the college level. And Larry Brown molded me into an MVP and a Hall of Fame player. Without those guys I wouldn't be here. Without those guys, man. I didn't do this by myself, man. It was so many people, so many fans that came in there and cheered for me, night in and night out. So many people supported me and believed in me. They made it so easy for me to believe in myself, because I didn't want to let them down. I wanted my fans and my family and my friends to be proud of me."

Iverson said he will save time in his Basketball Hall of Fame induction speech to mention the people who criticized him throughout his career, explaining that they are also responsible for molding the player who earned a spot in Springfield.

"Even the ones that were negative in my career, obviously to try and prove them wrong'' was a motivation, he said.

Iverson's absence at the start of Thursday's festivities made O'Neal the center of attention. Fellow inductee Sheryl Swoopes said O'Neal offered her $1 million to fall while walking down the red carpet to receive her Hall of Fame jacket. Swoopes joked she considered it but passed when Shaq couldn't show her the actual money.

O'Neal produced one of the more comical moments of the jacket ceremony when he sprang from his seat to assist 7-foot-6 Yao Ming with putting on his oversized jacket.

Asked about Friday's bigger stage, O'Neal said he wouldn't feel any pressure to put on a show or keep things light at Friday's induction ceremony.

The jackets also feature a silver lining with Basketball Hall of Fame and Haggar logos, antiqued brass buttons with dual logos, and a larger felted patch showcasing the Hall of Fame emblem on the left breast. Each blazer features the recipient's name woven in and is handmade in Ohio.

Presented with the first orange jacket after an unveiling, Hall of Fame chairman Jerry Colangelo quipped, "We'll certainly be seen wherever we are." 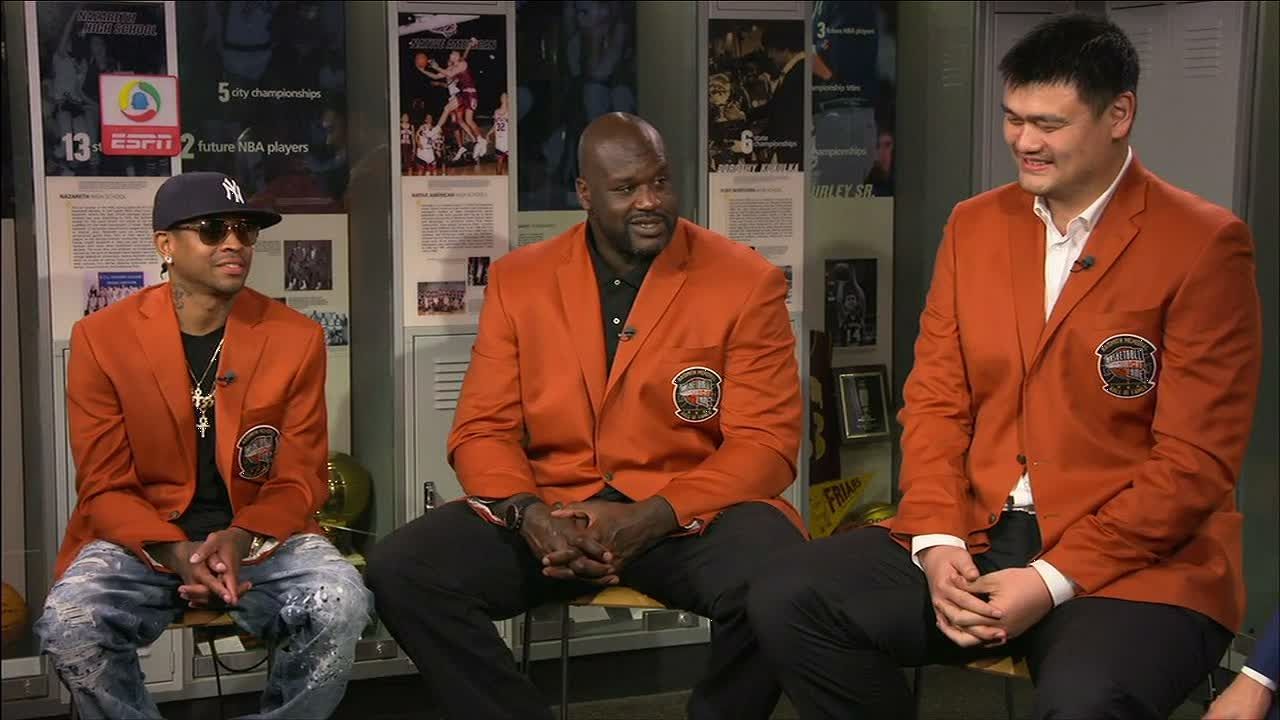