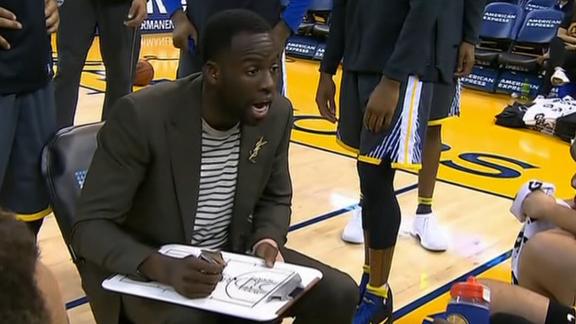 OAKLAND, Calif. -- Golden State Warriors coach Steve Kerr captured his 250th win on Saturday and then he took some time off on Monday.

During a timeout midway through the first quarter of a 129-83 win over the Phoenix Suns-- the team that drafted Kerr in the second round in 1988 and for which Kerr served as GM from 2007 to '10 --Kerr handed his clipboard to Andre Iguodala to run the huddle.

Iguodala sat in Kerr's chair breaking down the plays to his teammates while Kerr stood a few feet away with his assistants.

As the game continued, David West received a coaching nod in the huddle, as didDraymond Green, who sat out Monday's game with a sprained finger.

Green ran most of the timeout huddles throughout the game.

Golden State (44-13) has won three in a row but had previously dropped three of four contests. Kerr said his guys needed to hear a new voice.

"I told them the other night after the last game [on Saturday] that we were going to do it," Kerr said. "It's their team. I think that's one of the first things you have to consider as a coach. It's not your team, it's not [general manager] Bob Myers' team, it's not [owner] Joe Lacob's team -- although I'm not going to tell Joe that.

"It's the players' team, and they have to take ownership of it. And as coaches, our job is to nudge them in the right direction, guide them, but we don't control them. They determine their own fate and I don't feel like we focused well at all the last month, and it just seemed like the right thing to do. I thought they communicated really well together and drew up some nice plays, and it was a good night for the guys."

Across the league, players occasionally may run the huddle for a small portion of a timeout, but Kerr's decision to completely hand the reins over to players multiple times in a game was uncommon.

"It shows a lack of respect for an opponent, and maybe right now we don't deserve respect," Suns forwardJared Dudleytold ESPN. "When you keep getting beat by 40, teams won't respect you. But it's up to us to change that."

Immediately after the game, Kerr met with Suns coach Jay Triano on the court.

"I told Jay afterward that it had nothing to do with being disrespectful," Kerr said. "It had to do with me reaching my team. I have not reached them for the last month. They're tired of my voice. I'm tired of my voice. It's been a long haul these last few years and I wasn't reaching them, and we just figured it was probably a good night to pull a trick out of the hat and do something different.

"I thought the players responded really well. I just feel like when we're focused, we are really tough to beat, and tonight we were focused. And I think just having to count on each other, and not hearing my voice -- which sort of sounds like Charlie Brown's teacher or parent or whoever's voice that is. At this point, that's what I sound like to them. So, they needed a different voice."

Triano took it in stride.

"I noticed their plays were a little better out of timeout tonight," Triano told ESPN jokingly. "Nah, I didn't have a problem with what Steve did."

Kerr said he considered allowing his assistants to take over the huddles, but added, "We're pretty consistent with our messaging. I felt it was better to kind of let the players figure things out and do things on their own."

The player takeover actually began Monday morning. Kerr said Iguodala pretty much ran shootaround, andJaVale McGeewas on the computer helping out with film session. Kerr's unique technique worked, resulting in a 46-point thumping that happened to be the largest margin of victory ever over Phoenix.

"You can look at it two ways: You can say anybody can coach that team, or you can say it's a [good method]," Suns starDevin Bookertold ESPN. "I liked the move personally. If I was a coach, I'd do that throughout the year, so I wouldn't even look at it as disrespectful.

"I'm sure people are going to say it's disrespectful, but I think Steve is an easygoing guy who has that relationship with his guys. But if he didn't have four All-Stars, I don't think he'd be doing that."

Kerr lets his players take charge
Steve Kerr wanted his team to stay focused heading closer to the All-Star break, so he had his players lead the way in the huddle in a dominant win against the Suns.