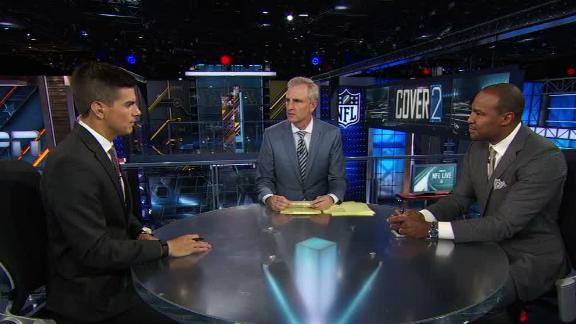 The Tennessee Titansagreed to terms with veteran wide receiver Andre Johnson on Friday.

The Titans have not disclosed terms of the deal, but sources told ESPN's Adam Schefter that Johnson will sign a two-year contract.

Johnson is owed $2.5 million this season by theColtsbuthad offset language in his contract with Indianapolis, meaning the Titans will assume some of that salary, sources told Schefter.

Johnson visited Tennessee with a handful of other players Tuesday. The Titans had two open roster spots and did not need to make an additional move to sign him.

He joins a wide receiver corps loaded with uncertainty, includingKendall Wright, Harry Douglas, Justin Hunter and Dorial Green-Beckham, as well as free-agent addition Rishard Matthews and fifth-round pickTajae Sharpe. Matthews and Sharpe finished the offseason as the Titans' starting wide receivers, with Wright typically working out of the slot as the third receiver.

If Johnson makes the roster, he will play four of his 16 games against teams he used to play for in the AFC South. He was a member of the Coltsin 2015 following a 12-season run with the Houston Texans in which he was named to the Pro Bowl seven times.

The 35-year-old Johnson appeared in all 16 games for Indianapolis last season, tallying 41 catches for 503 yards and 4 touchdowns, a noted drop in production as he worked with a new team and quarterback uncertainty following injuries to Andrew Luck.

Entering the season as the No. 2 receiver behind T.Y. Hilton, Johnson never found his comfort zone in Indianapolis. There was a point where Griff Whalen was on the field on third down over Johnson, who didn't have more than 81 yards receiving in a game for the Colts.

Drafted No. 3 in 2003, Johnson was released by the Texans in 2014 after his production dipped andDeAndre Hopkins started to emerge as the go-to guy for Houston.

Johnson has caught 1,053 passes in his career for 14,100 yards and 68 touchdowns. He ranks eighth in the NFL in career receptions and ninth in yardage.

The Titans report to camp Friday and are scheduled to practice Saturday afternoon.