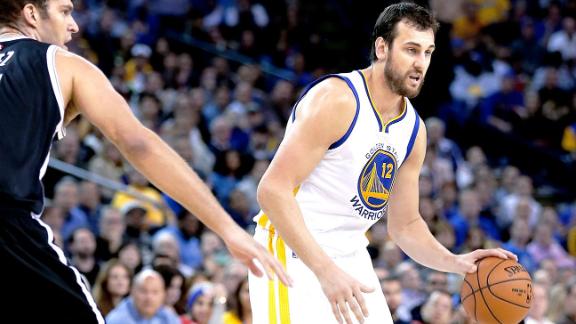 Bogut, who will sit out his fifth consecutive game Thursday against Oklahoma City, had platelet-rich plasma therapy on his knee after consulting with the team's medical staff and his personal physician from Australia.

"We fully support Andrew in his decision to undergo the PRP treatment," Warriors general manager Bob Myers said in a statement. "Our number one concern is that Andrew is 100 percent healthy and we will continue to support him in any way to make that happen."

The 7-footer is averaging 7.1 points, 9.3 rebounds and 2.2 blocks per game as the Warriors have gotten off to an NBA-best 21-3 start this season.

Last spring, a fractured rib kept Bogut from playing in the first-round playoff loss to the Los Angeles Clippers. He also missed 50 games recovering from left ankle surgery during the 2012-13 season, playing through pain -- and playing well -- when he returned for the Warriors' surprising run to the second round.

The Warriors originally said Bogut had tendinitis before listing it as knee chondromalacia and bone edema. The injury causes bone marrow to swell and absorb fluid and can be extremely painful.

Bogut said before Golden State's loss at Memphis on Tuesday night -- which ended the team's franchise-record 16-game winning streak -- that he hadn't felt any improvement since leaving in the first quarter against Minnesota on Dec. 8. He also had his knee drained last week.

In PRP therapy, blood is drawn and placed in a centrifuge that spins it to separate the platelet-rich plasma. The platelets, which release growth factors for tissue healing, are re-injected into the injured joints and muscles.

Golden State's Andre Iguodala underwent PRP treatment on his right knee in the offseason and said he came back stronger. Houston Rockets All-Star center Dwight Howard missed 11 games earlier this season after undergoing the procedure on his right knee.