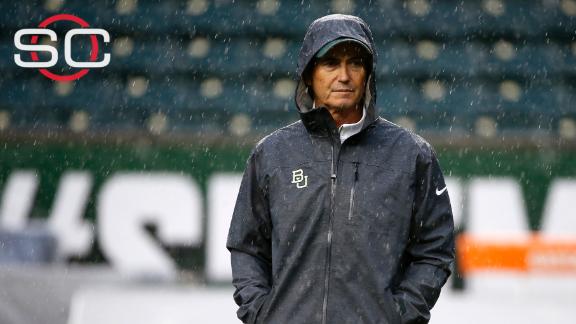 The attorney for a sexual assault victim suing Baylor University is claiming that former head football coach Art Briles backed out of a pledge to support and apologize to the victim, who was raped by a Baylor football player in 2012.

The issue so angered the woman, Jasmin Hernandez, and her attorneys, that they released a statement detailing the interaction on Monday.

In 2012, Hernandez, a former Baylor student, was raped by former football player Tevin Elliott. He was sentenced to 20 years in prison and fined $10,000 for sexually assaulting Hernandez, and his criminal trial revealed allegations of rape by three other women and a misdemeanor charge for trying to assault another woman.

Hernandez sued Baylor, Briles and former athletic director Ian McCaw in March, saying Baylor and the others did not comply with federal Title IX law: Baylor "failed to properly train and educate their employees ... in appropriate response to allegations of sexual harassment, sexual abuse, and retaliatory conduct ... ."

Baylor, Briles and McCaw have been working to settle the lawsuit through Baylor, according to Hernandez's attorneys; an all-day mediation meeting Friday in Dallas ended without a deal, however.

The day before the mediation session, Briles' personal attorney, Ernest Cannon, filed a motion to separate Briles from Baylor University in the Hernandez lawsuit, meaning each would be able to fight or settle the lawsuit independently. The motion contended that Briles, who had been fired May 26, was being unfairly blamed for the school's overall institutional failure to address sexual assault and that Baylor's attorneys were not working on his behalf.

After Cannon filed the motion Thursday, he called Hernandez's Texas attorney and said that Briles "promised" to come to Friday's mediation session "to support Jasmin ... and help her, and to apologize to her and her family,"Zalkin told Outside the Lines.

On Friday, Briles and Baylor reached a settlement about his firing, according to The Waco (Texas) Tribune-Herald, and Cannon withdrew the legal motion, leaving Briles to be represented by Baylor's attorneys. Neither Briles nor Cannon showed up for the mediation meeting on Friday, Zalkin said. The mediation ended without a deal, Zalkin said.

Hernandez "was hurt. ... She was upset and she was offended," Zalkin said. He said Cannon did not offer an explanation for not showing up when reached Friday, only "that they decided not to come."

Cannon did not respond to emails and voicemail messages left for him Monday.

ESPN typically does not name victims of sexual assaults, but Hernandez filed the lawsuit using her name and is not requesting anonymity about her case.

Baylor has been at the center of nationwide attention over its handling of sexual assault allegations and investigations, including several that have involved athletes. In recent weeks, Baylor has dealt with the fallout from that negative attention: the demotion and then resignation of former university president and chancellor Kenneth Starr; the firing of Briles; the suspension and then resignation of former athletic director McCaw; and the firings of multiple athletic department employees.

Despite being a private school, Baylor is required by the federal Title IX statute to investigate allegations of sexual assault and violence thoroughly and to provide security, counseling services and academic help to those who report assaults. Part of the law's goal is to help keep victims in school. Hernandez said the stress of dealing with her assault, and the lack of counseling and academic support from Baylor, prompted her to drop out in 2013.