Barry Bonds: Yankees should celebrate Alex Rodriguez for No. 660 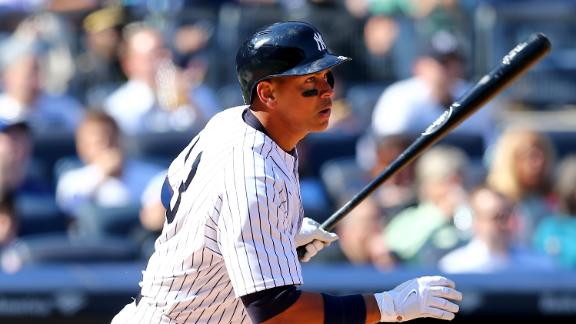 Barry Bondscan't understand why the New York Yankees continue to turn a blind eye to Alex Rodriguez's needing only five home runs to tie Willie Mays in fourth place on the all-time list.


"Anytime anybody in the game does something that's a great accomplishment, the game of baseball should celebrate that," Bonds told USA Today Sports. "No matter what. Baseball is benefiting from that person's hard work, so baseball should at least celebrate.

"Why the hate? Why hate on something you're paying to see? I don't understand it. He's entertaining us. I wish life wasn't like that."


Rodriguez, who has three years and $61 million remaining on his contract with the Yankees, could earn a $6 million bonus by tying Mays. The Yankees, however, have vowed to fight the bonus, as they plan to argue that it is worthless because of Rodriguez's drug history and his season-long suspension.


Rodriguez said he's thankful for the kind words from Bonds.


"Anyone who supports me at this point is well appreciated," Rodriguez said after the Yankees' 6-5 win over Baltimore on Monday. "It is not taken for granted, that's for sure, but my focus continues to stay between the lines."


Mays said he has no issues with it.


"I don't think I have any feeling about it at all," Mays told the New York Daily News. "Records are there to be broken. ... I know where you're going with this. I leave that for the fans to do."


Yankees manager Joe Girardi said of A-Rod hitting his 600th homer: "Some people are going to want to celebrate it, some people are not. I think it is a personal preference."


And after that? Could Bonds' all-time mark of 762 home runs be in A-Rod's crosshairs? Rodriguez only needs 22 more RBIs to pass Bonds (1,996) for second on that all-time list.


"I told him he better get to work,'' Bonds told USA Today Sports. "I'm not saying it's not possible. I just don't know if he can do it or not. But he's capable. And being a DH is a good situation so you don't have to beat your body up."


Although Rodriguez has played in all of the Yankees' first six games, he has batted in five different spots in the lineup, as high as second and as low as seventh. On Saturday, he played first base in a big league game for the first time. He leads the Yankees in batting (.300) and RBIs (six) and is second in OPS (.967).


"I told Alex, you don't need to prove anything to anybody," Bonds told USA Today Sports. "What do you need to prove? That you can hit another home run? That you can play baseball? Why the hell does anyone need to ask him that? He already proved it. The proof is over.


"If you want to prove something, prove how much you love playing baseball. Show them how much you enjoy playing the game. Enjoy the things that you love."