Bengals' A.J. Green out vs. Colts 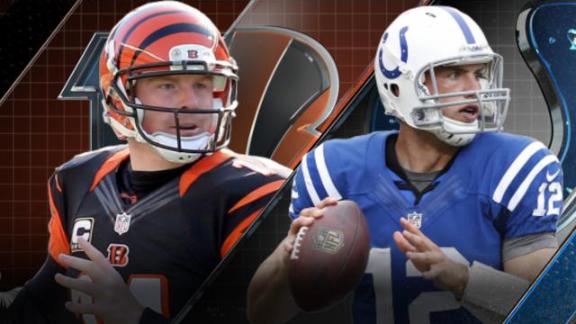 INDIANAPOLIS -- Cincinnati Bengals receiver A.J. Green will not play in Sunday's wild-card round playoff game against the Indianapolis Colts at Lucas Oil Stadium.

One day after he was listed as doubtful on the Bengals' Friday injury report, his status was officially downgraded Saturday afternoon to out. All week, Green has been under the NFL's concussion protocol, stemming from a head injury sustained in the fourth quarter of last Sunday's 27-17 loss in the regular-season finale at Pittsburgh.

Without the Pro Bowler, the Bengals likely will rely even more heavily on rookie running back Jeremy Hill, who has emerged as a valuable weapon in their offense in recent weeks.

The injury hits could keep coming for the Bengals' offense before the playoff game, though. Tight end Jermaine Gresham has been nursing a back injury all week and like Green, has practiced only one day. Gresham was on Friday's injury report as questionable. His playing status could be a game-time decision.

Green was expected to see an independent neurologist Saturday as part of the protocol. It appears he didn't pass the doctor's evaluations. If he had, he would have been cleared to play.

After sitting altogether Wednesday, Green appeared in uniform as a limited participant Thursday. He did some light cardio but mostly stood around and watched as teammates stretched and participated in position drills during the open portion of the practice. On Friday, he didn't practice at all.

Asked following the workout if anything changed for Green between the two days, Bengals coach Marvin Lewis said, "Nope."

Green suffered the concussion after catching a first-down pass in the fourth quarter of last weekend's game. Just after the reception, he was stripped of the ball before getting hit in the head by Steelers safety Mike Mitchell.

In addition to the head injury, Green has been fighting through a deep biceps bruise he suffered when he took a helmet to his arm during a game the previous Monday. Green also missed parts of four games this season because of a toe injury.

Named to his fourth Pro Bowl, Green had two games in the regular season in which he caught at least 10 passes. He finished with 69 receptions for 1,041 yards and six touchdowns, becoming one of three receivers to have had 1,000-yard seasons each year since 2011. He and Randy Moss also are the only receivers in NFL history to have 1,000-yard seasons in each of their first four years in the league.

In three career postseason games, Green has just 13 catches on 32 targets for 161 yards and no touchdowns. Four of quarterback Andy Dalton's six playoff interceptions have come when he was targeting Green.