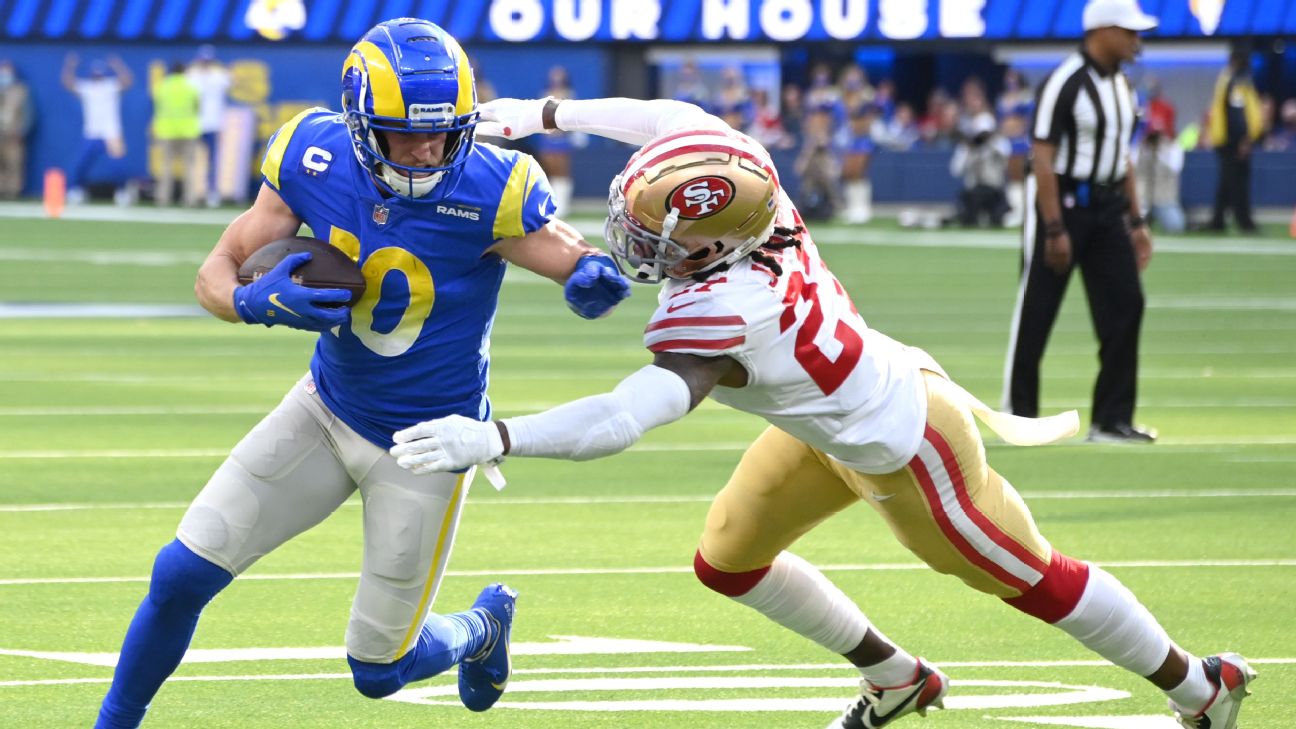 The NFL's conference championship roundfor the 2021 season is stacked, and we've got you covered with what you need to know for Sunday's NFC and AFC championships. Our NFL Nation reporters bring us the biggest keys to both games, a bold prediction for each matchup and, of course, final score picks.
Additionally, ESPN Stats & Information provides a big stat to know and a betting nugget for each contest, and our Football Power Index (FPI) goes inside the numbers with a matchup rating (on a scale of 1 to 100) and a game projection. Matt Bowen picks out a key matchup to watch for both games, and Kevin Seifert tells us what to know about the officiating. Everything you should know is here in one spot to help you get ready for a loaded two-game weekend of NFL playoff football.


First up, the Bengals head to Kansas City to face the Chiefs -- an offensive showdown betweenPatrick Mahomes and Joe Burrow. Then it's NFC West foes facing off in the second game, with the 49ers matching up with the Rams for a third time this season. And remember: The winners are off to Super Bowl LVI.

What to watch for: The 49ers have won six straight games over the division rival Rams, which includes a 17-point come-from-behind win in Week 18 to clinch a playoff berth. The Niners bring All-Pro receiver Deebo Samuel and tight end George Kittle, who have led a resilient, bruising brand of football, while the Rams have a proven knack for scoring quickly on explosive plays behind quarterback Matthew Stafford and Cooper Kupp, the NFL's leading receiver. As for what the Rams must do to finally get the best of the Niners and advance to Super Bowl LVI? "We don't need to reinvent the wheel here," Kupp says. "It's just about doing our job and taking this as a new week." -- Lindsey Thiry

Bold prediction: San Francisco quarterback Jimmy Garoppolo will throw three touchdown passes. He has yet to throw for a score in these playoffs and has only two touchdowns, and five interceptions, in his five playoff starts. But Garoppolo has a history of playing well against the Rams -- he has a 71.7 Total QBR and won all six starts against them -- and the Rams still have questions up the middle of their defense, allowing a 77% completion rate and 7.9 yards per attempt on throws inside the numbers this season. Buoyed by a strong run game, the oft-maligned Garoppolo will deliver on the big stage. -- Nick Wagoner

Stat to know: Midseason acquisitions have been key for the Rams. Since joining Los Angeles in Week 10, receiver Odell Beckham Jr. is second on the team in receptions (37) and has caught a touchdown in six of 10 games played. He has caught 10 of 12 targets this postseason, too. And outside linebacker Von Miller has recorded at least one sack in six straight games, tied for the longest streak of his career (three other times, most recently in 2018). Opposing quarterbacks have posted a 2.3 Total QBR when both Miller and defensive tackle Aaron Donald rush the passer this postseason.

Bowen's game-plan key: Watch for linebacker Fred Warner to play a role as a blitzer in the Niners' tilted five-man fronts. San Francisco blitzed on more than a fourth of the Rams' third-down plays in its Week 18 win this season. Read more on E+.

Seifert's officiating outlook: Referee Carl Cheffers' regular-season crew led the NFL with 16.6 flags thrown per game, but these two teams ranked among the 14 least-penalized teams in the league. The Rams saw 92 flags and the 49ers saw 117. During the regular season, Cheffers threw 10 flags for roughing the passer, tied for sixth most in the NFL, and 61 for offensive holding, second most in the league -- though he will have a different crew on Sunday.


What to watch for:Bengals receiver Ja'Marr Chase wrecked the Chiefs in the December meeting between these teams, catching 11 passes for 266 receiving yards and three touchdowns. The Chiefs undoubtedly won't allow that to happen again, but at what cost? They mostly took away Buffalo receiver Stefon Diggs' impact last week against the Bills, but then Gabriel Davis had a big game. And Cincinnati has receivers Tee Higgins and Tyler Boyd -- plus running back Joe Mixon -- along with Chase. Chiefs defensive coordinator Steve Spagnuolo's schemes in this regard loom large. -- Adam Teicher

Bold prediction:Chiefs quarterback Patrick Mahomes will throw for at least 390 yards. Kansas City leaned on a successful run game in the second half of the first matchup against Cincinnati, which led to a quiet game from Mahomes. But don't be shocked if the reigning AFC champions look for more explosive plays in the passing game this time and get their revenge against the Bengals. Mahomes already has 782 passing yards and eight touchdown passes in two playoff games this season.-- Ben Baby

Stat to know: Per the Elias Sports Bureau, Cincinnati quarterback Joe Burrow is the sixth player to enter a conference championship game with 50-plus sacks -- and his 62 are easily the most. The previous five QBs all failed to reached the Super Bowl, and four of them saw their teams fail to score an offensive touchdown in that conference title game. However, Burrow is also the fifth player in the past 30 seasons to enter a conference championship game while leading the NFL in both completion percentage and yards per attempt (including playoffs). And these aren't easy completions. The second-year QB has the NFL's best completion percentage over expectation, according to NFL Next Gen Stats.

Bowen's game-plan key: The Chiefs need to heat up Burrow in the pocket, and outside linebacker Melvin Ingram III could play a big part. Expect Kansas City to scheme him up and get him some one-on-one matchups.Read more on E+.

Seifert's officiating outlook: Referee Bill Vinovich's regular-season crew (crews change in the playoffs) annually throws the fewest flags among the NFL's 17 crews, and this season was no exception. His crew averaged 10.9 flags per game, 34% less than the crew that called the most (Carl Cheffers, 16.6). He'll preside over a game that features the NFL's least-penalized team (Bengals, 84) and ninth most-penalized team (Chiefs, 129). Vinovich was the only referee in the NFL not to call a single roughing the passer penalty during the regular season, and his regular-season crew threw the third-fewest flags for holding (34).

Matchup must-reads: Burrow can cement place among top young quarterbacks ... Why Hill had to pivot this season... McShay: How Mahomes changed the way I scout QBs 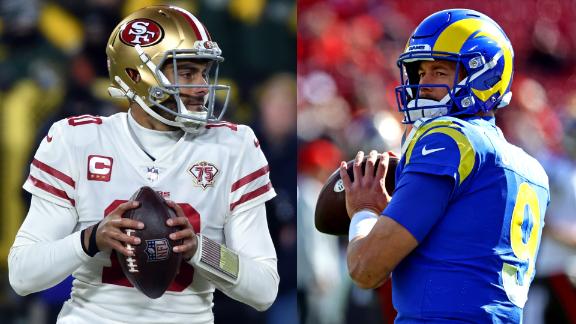